TV-PG | Action, Comedy, Drama | TV Mini-Series (2021)
Episode Guide
9 episodes
1:34 | Trailer
61 VIDEOS | 551 IMAGES
Blends the style of classic sitcoms with the MCU in which Wanda Maximoff and Vision -two super-powered beings living their ideal suburban lives-begin to suspect that everything is not as it seems.

On a Very Special Episode...

Wanda addresses Vision's worries when he grows suspicious of the neighbors' strange behaviour.

Wanda embarks on a troubling journey revisiting her past for insight into her present and future.

Disturbances on Halloween separate Wanda from Vision, who looks into anomalous activity in Westview.

March Picks: The Movies and TV You Can't Miss
a list of 22 images
updated 17 hours ago

2021 TV Guide: The Best Shows Coming This Year
a list of 38 images
updated 2 days ago

Search for "WandaVision" on Amazon.com 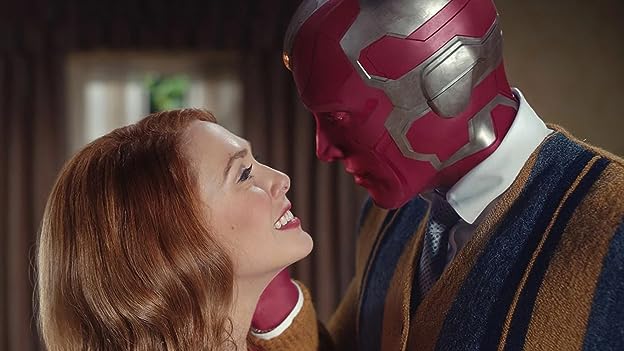 "WandaVision" stars Elizabeth Olsen and Paul Bettany are joined by some of their co-stars to share their favorite moments with the marvelous twosome.

Blends the style of classic sitcoms with the MCU in which Wanda Maximoff and Vision -two super-powered beings living their ideal suburban lives-begin to suspect that everything is not as it seems.

disney plus | based on comic | superheroine | vision character | marvel comics |

Cinematographer Jess Hall used 47 different camera lenses for the seven time periods covered in WandaVision, many of which were modern lenses custom-modified to keep characteristics of the actual period lenses. Lighting was adjusted to align with the periods being portrayed. Tungsten lights were used in filming the 1950s-1970s era episodes, as they were commonly used in production during that period. LED light was used for scenes depicting the modern era, as Hall explained that was "the correct time line for when this equipment entered the filmmaking vocabulary." See more »

Scarlet Witch: This is our home now. I want us to fit in.
See more »

The main closing credits are made out of red, blue and green TV dots that form into various shapes. See more »

Featured in Mediaholic: WandaVision Review! What Next After Episode 3? (2021) See more »

It might have been an error on Disney's part to release only the first 2 episodes at once instead of 4 episodes. While I am on of the few people who absolutely loved the intrigue and mystery of the first three episodes, this exceptional show has been getting a lot of hate due to a lack of plot.

... And then the 4th episode came out. Not only was it an exceptional episode, but it justified the use of the first three and even gave some answers to the many questions of Wanda vision.

Q: Is Agnes's "husband" Ralph, secretly Mephisto ?
Q: Do you have to see this TV show before watching Doctor Strange in the Multiverse of Madness to understand that film?
Q: Do you have to know about Marvel Studio's comic characters to 'get the jokes', understand the references, or will 'stuff' go over my head, and I won't get what was meant?
See more »
Edit