Ratched helps Edmund find an outlet for his urges and offers her services to Wainwright. Tired of living a lie, Gwendolyn leaves her husband.

Promoted to head nurse, Ratched plans a dance at the hospital and invites Gwendolyn to be her companion. Lenore makes Ratched an offer.

When a woman from his past puts a price on his head, Hanover reveals a dark secret to Ratched. Nurse Bucket administers a brutal treatment.

September Picks: The Movies and TV You Can't Miss
a list of 17 images
updated 1 week ago

Séries Vistas
a list of 25 titles
created 2 months ago

Search for "Ratched" on Amazon.com

One month later, Ratched fights to save Edmund from the electric chair while dreaming of a new life with Gwendolyn.

Why the "Ratched" Set Was Nothing But Good Vibes 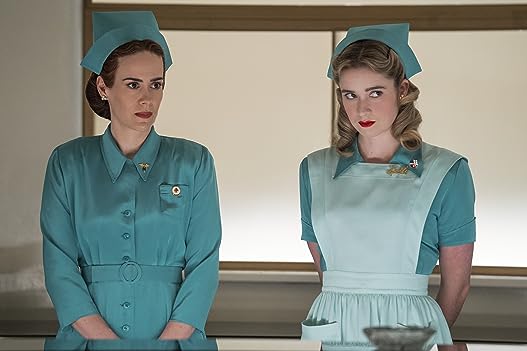 Check in with Sarah Paulson and her "Ratched" co-stars to hear about their experiences making the show together, and what they'd like to see in season 2.

Ratched is a suspenseful drama series that tells the origin story of asylum nurse Mildred Ratched. In 1947, Mildred arrives in Northern California to seek employment at a leading psychiatric hospital where new and unsettling experiments have begun on the human mind. On a clandestine mission, Mildred presents herself as the perfect image of what a dedicated nurse should be, but the wheels are always turning and as she begins to infiltrate the mental health care system and those within it, Mildred's stylish exterior belies a growing darkness that has long been smoldering within, revealing that true monsters are made, not born. Written by Netflix

Murphy revealed that he had mapped out a four season origin arc for Nurse Ratched, where she would face off against a different male adversary each season; with the fourth and final season blending One Flew Over the Cuckoo's Nest into the narrative. See more »

During the entire first season, the location of Lucia seems to be inconsistent with the actual location in the real world. There are several mentions of driving "down" to Monterey, with shots of cars driving south along the coast, when Monterey is actually north of Lucia. Gwendolyn occasionally seems to travel relatively quickly from her job (and presumably home) in Sacramento to Lucia, despite the drive from one to the other being over 200 miles. See more »

A good, stylised drama with horror undertones.
20 September 2020 | by Sleepin_Dragon – See all my reviews

Ratched has certainly had the hype recently, hardly surprising when you think of Murphy's work, the big question, is it up to the hype?

The first thing that will strike you, the visuals, it is a fabulous looking show, bright, stylish, it has a very cinematic feel.

The acting is terrific, Sarah Paulson, Sharon Stone, and just wait til you see Sophie Okonedo, she is incredible.

It definitely has an AHS vibe, but it's more subtle, by expect some violence and gore, although the real horror comes from the medical practices that were indeed used for quite a few years.

You'll be kept guessing, you won't have a clue what comes next, it has the ability to surprise.