Search for "Coming 2 America" on Amazon.com 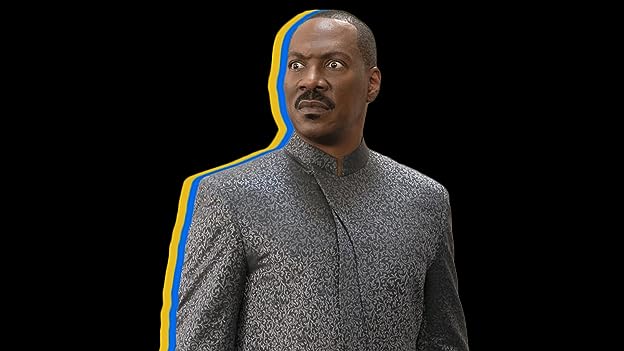 Sensing that trouble is brewing in the African kingdom of Zamunda, three long and prosperous decades after Prince Akeem and Lisa McDowell's opulent wedding in Coming to America (1988), King Jaffe Joffer and Semmi drop a bombshell. As a result, with three lovely daughters and no sons, it seems that Prince Akeem is with his back to the wall, as General Izzi, the megalomaniac despot of the neighbouring country of Nexdoria, dreams of seizing power through a political marriage of convenience. Now, newly crowned King Akeem and his trusted confidante, Semmi, have to return where it all began, the bustling borough of Queens, New York, to retrieve Lavelle: the illegitimate son unsuspecting Akeem never knew existed. Can the prince of Zamunda restore peace and stability in less than a week? Written by Nick Riganas

A sequel is in the heir.

Makeup artist Mike Marino said he loves makeup. He explains that it is very versatile, " because you can change lighting and change angles, something not always possible with CG." In his opinion, Makeup is not going away and has a place at the creative table. "I think we are proving that it has the weight to stay around." He adds that it's important not to look at the makeup as a product or a prop, but as a means to create characters, which he says, is a view similar to Stan Winston's. See more »

At one point, the flags on General Izzi's shoulders are upside-down compared to the other scenes. See more »

[Akeem is doing his best to explain why he has an illegitimate son]
Akeem: This happened before we even met!
Lisa: It's not like you're the first man I've ever been with.
Akeem: I have --
[stuttering]
Akeem: What did you just say about the other men?
See more »

Outtakes are shown during the closing credits. See more »

I am going to be as direct and uncensored as I need to be and ope someone in Hollywood reads this.

You are losing your audience. One of these days we will leave permanently.

No one, and I mean no one, wants to see a fat slob be licked down there. I do not care what you pretend. We just do not.

You had 30 years and came up with a movie without one funny scene?

Look at yourselves in the mirror.

Q: What happened to Amazon releasing on Dec 18?
Q: Aside from Murphy and Hall, which of the cast/characters return from the original?
Q: Why wasn't Lisa McDowell's sister Patrice (Allison Dean) in the movie?
See more »
Edit