TV-MA | Animation, Action, Adventure | TV Series (2021– )
Season 2 Premiere
2022
Episode Guide
10 episodes
2:15 | Trailer
10 VIDEOS | 111 IMAGES
An adult animated series based on the Skybound/Image comic about a teenager whose father is the most powerful superhero on the planet.

We Need to Talk

Feeling lost and confused, Mark looks for advice from Eve. At the same time, everyone's looking for him.

Where I Really Come From

Feeling confident in his new abilities, Mark risks a team-up with a local villain to take down a crime lord, while simultaneously juggling school and a new relationship.

TV Tracker: Renewed and Canceled Shows
a list of 86 images
updated 1 day ago

2021 TV Guide: The Best Shows Coming This Year
a list of 46 images
updated 2 weeks ago

izlediğim diziler
a list of 30 titles
created 5 months ago

Search for "Invincible" on Amazon.com

Meet the Heroes of "Invincible" 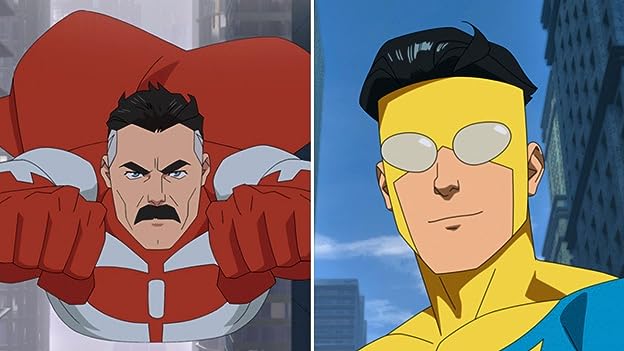 The creator and cast of "Invincible" — J.K. Simmons, Steven Yuen, Gillian Jacobs, and more — introduce us to their characters in the new original animated series and let us know what their character's favorite movies and TV shows would be.

The son of Earth's most powerful superhero is about to become something greater than himself: something bold, something universal, something - Invincible. From the comics to the screen, Invincible follows Mark Grayson's journey of becoming Earth's next great defender after his father, Nolan Grayson: also known as Omni-Man. Written by Johnny

The series title starts off clean, and gets blood on it with each episode. See more »

Featured in IMDb on the Scene - Interviews: Invincible (2021) See more »

Invincible really increases the standards in animated tv or web series by showing good character development, emotion, great ton of action and pg-18 violence which is kinda cool. Best thing is, every episode is 40 minutes instead of 20 😬