As a huge battle with the Danes is close, Edward has to make pivotal decisions that will affect the fates of Uhtred, Wessex - and England.

At the end of his days, Alfred takes Uhtred into his confidence about his plans for Edward's uncertain future, but Aelswith charts a different course.

From a sardonic doctor and a teen werewolf to some very different detectives, we've got four iconic TV shows for you to stream now on Prime Video.

Tv Series
a list of 41 titles
created 2 months ago

How many episodes of The Last Kingdom have you seen?

Search for "The Last Kingdom" on Amazon.com

Back in the Day: Stars of Streaming, Then and Now 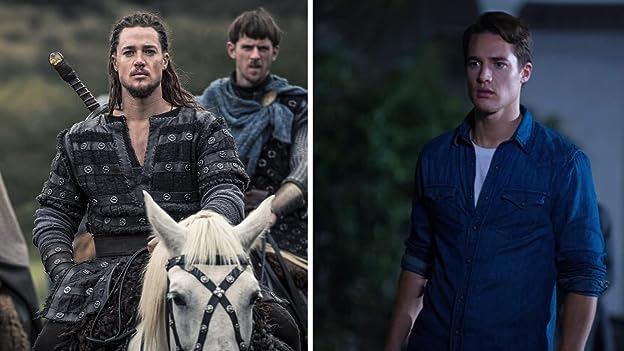 Travel back in time to check out some early roles of the stars of "The Last Kingdom" and more of your favorite streaming shows.

Check out the full gallery

An English combat nurse from 1945 is mysteriously swept back in time to 1743.

Sheriff Deputy Rick Grimes wakes up from a coma to learn the world is in ruins and must lead a group of survivors to stay alive.

The survivors of a plane crash are forced to work together in order to survive on a seemingly deserted tropical island.

The year is 872, and many of the separate kingdoms of what we now know as England have fallen to the invading Danes, leaving the great kingdom of Wessex standing alone and defiant under the command of King Alfred. Against this turbulent backdrop lives our hero, Uhtred. Born the son of a Saxon nobleman, he is captured by the Danes and raised as one of their own. Forced to choose between the country of his birth and the people of his upbringing, his loyalties are ever tested. What is he? Saxon or Dane? On a quest to reclaim his birthright, Uhtred must tread a dangerous path between both sides if he is to play his part in the birth of a new nation and, ultimately, recapture his ancestral lands...

Season three is based on the fifth and sixth book in Bernard Cornwell's Saxon stories: 'The Burning Land' and 'Death of Kings'. There are, however, many differences. Notably the role and fate of Skade. See more »

The Anglo-Saxons use kite-shields which where adopted in the 11th century, not the 9th. See more »

Referenced in The Buck Sexton Show: It's Time to Free America (2020) See more »

Keeping the soul of the books intact, The Last Kingdom delivers a extraordinary historical tale.
12 October 2015 | by sofnascimento7 – See all my reviews

In a way, BBC's The Last Kingdom is a first ever experience for me. It's certainly not the first series I watch, nor it's the first series based on books, not even historical fiction books. But it's the first series which I'd read the books it is based on way before it was even announced. So seeing it rumored, then officially announced and finally premiered was very interesting and exciting. I had a lot of hopes and fears for this. And I'm so gladly to say that based on the first two episodes of the series, my hopes were made into reality and my fears into joy. And so, inspired me to write my first review here.

I'll try to keep this as spoiler free as possible, but some are impossible to avoid.

The Last Kingdom tells the history of Uhtred of Bebbanburg, a Saxon noble who is captured and raised by the Danes, first as a slave and then as a son. His future will be one of battle within and without, fighting against powerful warlords and struggling between his love for the Danes and their culture and his duty for the Saxons.

In many ways, talking about how this series make this simple enough premise into a engrossing story full of nuance is talking about how the books do it. Here there is a commitment to reality that goes beyond most historical shows, and I'm not talking only about the clothes, weapons or history itself, but characters, their motives and relationships. At the center of The Last Kingdom is its characters and the show presents and develops then masterfully.

Take Ælfric (Joseph Millson) for example, Uhtred's uncle. When the young Uhtred (Tom Taylor) wakes up and realize his father went to war without him, he promptly go and ask him why he was left behind. His uncle barely talks to him and say he has to go and clear the stables. But the directing and acting in the scene makes it clear Ælfric has something sinister in mind. Uhtred get his pony and goes to join his father, and then you realize that that was Ælfric's plan all along. It's subtle and skillfully done, and with something that feel effortless you have a lot shown to you what Ælfric is all about.

When it comes to characters there is no compromise, they feel like real people that are just living their lives. Doing what they think is right and/or what is best for them and their loved ones. You won't find good or bad here, nor one dimensional characters. By the end of the first episode, you will find you will have feeling for these people, both positive and negative. And in the end, that is what keeps you interesting in a series. And you will care for the fate of Uhtred (Alexander Dreymon), Brida (Emily Cox), Alfred (David Dawson) and the many other great characters that are present in the first two episodes.

And from them stem all the other conflicts in the series. The political plotting and machinations are ever present in the fractured world that these people inhabit, and the leaders of both the Saxons and Danes are constantly trying to get things working in their favor. Together with political issues, there is religion. Christianity is a defining characteristic of the English, and because of the Norse paganism, they view the Danes not only as enemy of the Saxons, by enemies of God. The Danes of the other hand, view Christianity with a disinterested curiosity. In one opportunity Uhtred explain Heaven as Valhalla without all the drinking, fighting and humping. This passage helps to illustrate a kind of 'lightness' that the series, just as the books, have. Maybe lightness is not the best word, since there is plenty of violence and moments that will leave you shocked, but the story is told in a way that feels amiable and pleasant. That is done is the series by skillful directing , writing (in the first two episodes done by Nick Murphy and Stephen Butchard respectively) and editing. That, along with its character, might be the two most appealing things about The Last Kingdom.

Add to that a great score, beautiful scenery and great acting (although a little bit inconsistent in some moments) and you have the recipes for a series that stand tall and deserves to be seen. No matter what you like, The Last Kingdom (the first two episodes together are a nice demonstration of everything good about this story) might offer something for you.

For the books fan in particular, this is a series that even when it changes the story of the book it feels it belong, Bernard Cornwell's tone is ever present in it. Not to mention many small moments that shows the people responsible for the series really cared about the source material, like in shield wall battle (it doesn't reach the greatness of the book, but then, what battle scene anywhere does?), there is a scene of people walking over a dead body, something that feels taken right from the book. Or a sword strike that comes from bellow. Even some of the more questionable changes feel justified. Like giving the Saxon rectangular shields. In the end it proves extremely valuable as a tool to differentiate Danes from Saxons. But without a doubt, this is a adaptation that work is all levels and will delight most readers.