PG-13 | 2h 1min | Drama, Mystery, Romance | 21 October 2020 (USA)
2:22 | Trailer
8 VIDEOS | 46 IMAGES
A young newlywed arrives at her husband's imposing family estate on a windswept English coast and finds herself battling the shadow of his first wife, Rebecca, whose legacy lives on in the house long after her death.

Search for "Rebecca" on Amazon.com

Armie Hammer and Lily James Make 'Rebecca' Their Own 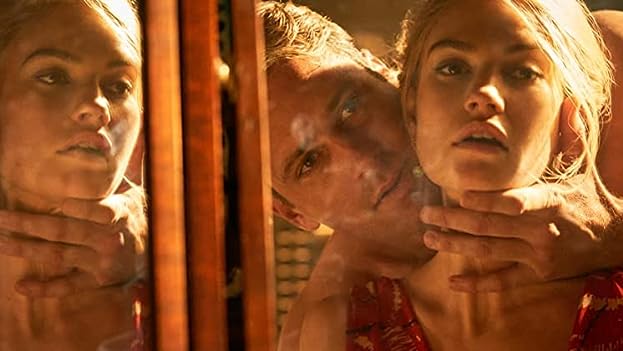 Armie Hammer, Lily James, and Kristin Scott Thomas star in the latest adaptation of Rebecca, a literary classic made famous by Alfred Hitchcock's 1940 Oscar-winning film. The cast and director Ben Wheatley discuss how they made the modern adaptation original.

After a whirlwind romance in Monte Carlo with handsome widower Maxim de Winter (Armie Hammer), a newly married young woman (Lily James) arrives at Manderley, her new husband's imposing family estate on a windswept English coast. Naive and inexperienced, she begins to settle into the trappings of her new life, but finds herself battling the shadow of Maxim's first wife, the elegant and urbane Rebecca, whose haunting legacy is kept alive by Manderley's sinister housekeeper Mrs. Danvers (Kristin Scott Thomas). Written by Netflix

Sam Riley's and Lily James's reunion after costarring in Pride and Prejudice and Zombies (2016). See more »

[first lines]
Mrs. de Winter: [narrating] Last night I dreamt I went to Manderly again. I dreamt that where our drive once lay, a dark and tortured jungle grew. Nature had come into her own and yet the house still stood. Manderly. Secretive and silent as it had always been. Risen from the dead. Like all dreamers, I was allowed to pass through my memory. Spanning the years like a bridge. Back to that summer in Monte Carlo when I knew nothing and had no prospects.
See more »

Read the novel, please! There is so much more in this story, and the movie only scratches the surface. The casting seemed really promising, but without a good script and a director, sadly disappointing end result. Could have been a great movie, such a shame, so many opportunities are missed.