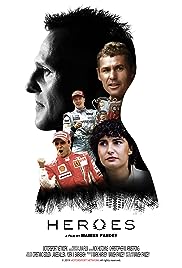 A new feature-length film focusing on the lives of five motor racing legends will be unveiled this July, in the week leading up to the British Grand Prix. The film, Heroes, has been written... See full synopsis »

Search for "Heroes" on Amazon.com

A new feature-length film focusing on the lives of five motor racing legends will be unveiled this July, in the week leading up to the British Grand Prix. The film, Heroes, has been written and directed by Manish Pandey, who ten years ago wrote the screenplay for the award-winning Senna.

This new movie - commissioned by the Motorsport Network - brings together drivers from F1, sportscars and rallying who tell their stories to each other over an evening in an English stately home.

"I wanted to get racers of different ages and disciplines together but in a location that was out of their comfort zone," says Pandey. "When you dig down into these characters, you discover - no matter what their background is - how much they have in common."

Though the motor racing disciplines differ, the ...

One of the best motorsports documentary. Best 2hr Spent this year