The Falcon and the Winter Soldier

The Whole World Is Watching

To find the source of the Super Soldier Serum, Sam and Bucky must scale a ladder of low-lifes starting in Madripoor with Zemo.

John Walker is named Captain America, and Sam Wilson and Bucky Barnes team up against the rebel group, the Flag Smashers.

Editors' Picks: Streaming on Disney Plus
a list of 40 images
updated 2 weeks ago

March Picks: The Movies and TV You Can't Miss
a list of 22 images
updated 3 weeks ago
Create a list »

Search for "The Falcon and the Winter Soldier" on Amazon.com

Title: The Falcon and the Winter Soldier (2021) 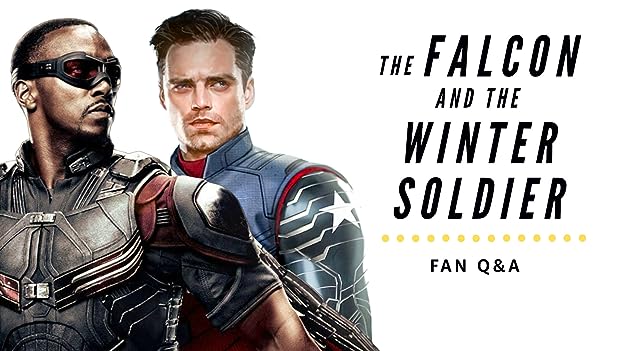 Anthony Mackie talks about sneaking into Prince's house, as he Sebastian Stan answer some burning fan questions for "The Falcon and the Winter Soldier" co-stars.

Following the events of 'Avengers: Endgame,' Sam Wilson/Falcon and Bucky Barnes/Winter Soldier team up in a global adventure that tests their abilities -- and their patience.

Sebastian Stan got into the best shape of his life for this show. He told Men's Health, "My body right now is probably the best it's ever been." Months before filming began, Stan teased his training and preparation for the role by posting a shirtless gym selfie on his social media accounts showing off his superhero physique with rippling six pack abs. He thanked his trainer Don Saladino and said he was proud of the body they achieved together. See more »

However, they are followed by a more complete cast list in the non-animated part of the end credits in which Mackie always receives top billing. See more »

I mean, it's just the first episode... Why is everyone rating 1/10 if u seen abt like 10 min? Why are u so mean?? I don't get it.. Patience, please. I really enjoy the first episode and I'm looking forward to see the next one. I really think this deserve a chance.