R | 2h 22min | Crime, Drama | 12 March 2021 (USA)
0:31 | Trailer
6 VIDEOS | 60 IMAGES
Cherry drifts from college dropout to army medic in Iraq - anchored only by his true love, Emily. But after returning from the war with PTSD, his life spirals into drugs and crime as he struggles to find his place in the world.

February Picks: The Movies and TV You Can't Miss
a list of 35 images
updated 2 months ago
Create a list »

Search for "Cherry" on Amazon.com

Why Tom Holland Was Willing to 'Risk It' for 'Cherry' 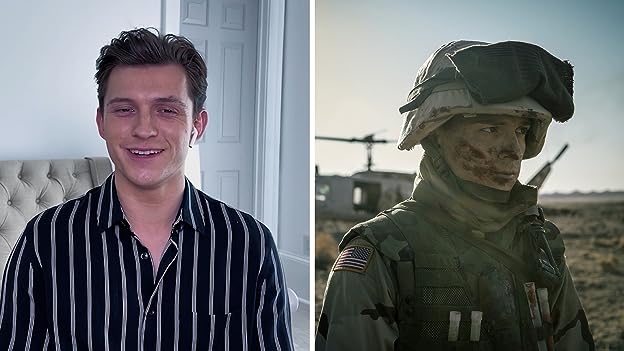 IMDb sits down with stars Tom Holland and Ciara Bravo, and directors Anthony and Joe Russo about their latest drama.

Cherry drifts from college dropout to army medic in Iraq - anchored only by his true love, Emily. But after returning from the war with PTSD, his life spirals into drugs and crime as he struggles to find his place in the world.

The camera sometimes turn black and white during conversations. This is supposed to be a way to express the inward feeling of the character. This same technique was used in Natural Born Killers (1994). That film starred Robert Downey, Jr., who was a frequent collaborator of Tom Holland in the MCU. See more »

Cherry takes Xanax, an anxiety medication. The Army does not allow recruits who have "mental disorder" like ADHD, anxiety, panic, behavioral disorders, or dyslexia to join. Any medication taken must be stopped to prove that a recruit can function substantially without it. So Cherry could not have taken an anxiety medication and still been allowed to join the Army. See more »

Cherry: Sometimes I wonder if life was wasted on me.
Cherry: It's not that I'm dumb to the beauty of things. I take all the beautiful things to heart, and then they f*ck my heart till I about die from it.
Cherry: It's just something in me has always drawn me away... until there's nothing holding me together.
See more »

I don't understand the low ratings. All this film does is show how much range Tom Holland and the Russo brothers have, that their not confined to the Marvel movies. Just watch and form your own opinion. Its good.

Q: When will they release a teaser?
See more »
Edit