Rue, trying to get clean for Jules, chaperones Gia at the carnival; Kat misreads a situation; Jules encounters Cal; Nate reveals who he really is.

The Trials and Tribulations of Trying to Pee While Depressed

Rue falls into a depressive episode and binge-watches 22 episodes of a British reality show; Jules visits an old friend; Cassie looks for advice to help her deal with the fallout of Halloween night.

Kat starts camming; Jules falls for a boy online; Rue is confronted about her lies at NA; Cassie and McKay spend the weekend at his college.

Vistos HBO
a list of 34 titles
created 11 months ago

Search for "Euphoria" on Amazon.com

"In the aftermath of being left by Jules at the train station and relapsing, the first special episode follows Rue (played by Emmy®-winner Zendaya) as she celebrates Christmas. Written ...

It's the winter formal at East Highland.

S1.E7 The Trials and Tribulations of Trying to Pee While Depressed
8.7
0
Error: please try again. 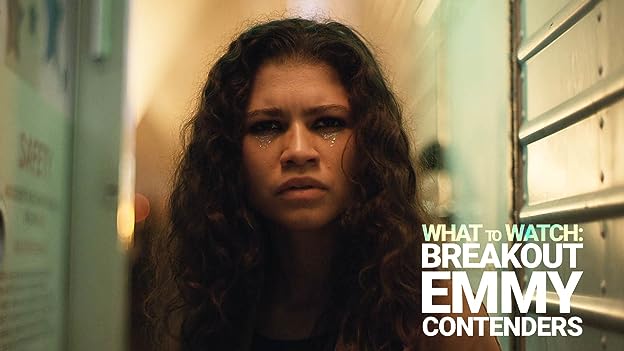 A look at life for a group of high school students as they grapple with issues of drugs, sex and violence. The series focuses on the relationship between two young girls trying to find their place in the world: recovering addict Rue and new-in-town Jules. Written by Wiki

Maude Apatow was always meant to be on the show. Sam Levinson and Maude having previously worked together on Assassination Nation, he loved how she was "so natural, vulnerable, and quiet." He kept her in mind while writing the Euphoria script. See more »

Throughout out the series, it's clear that the actors/actresses portraying teenagers are actually in their 20s+. This is done as to not interfere with the schooling of real teenagers and to give the general viewing audience who are teenagers themselves someone they can look up too. See more »

Cal Jacobs: I'm envious of your generation, you know. You guys don't care as much about the rules.
See more »

in the beginning, it seemed like the show was dark just for the sake of being dark.

everything seemed clichéd, and there was a vast degree of exaggerated negativity.

mix that with a slow beginning, and you've turned off most of your potential viewers.

however, during the fourth episode, i began to witness the story take a definite direction. it seemed to me that the relationships among the characters increased in complexity.

i would agree that this show isn't for everyone, but please give time for the story to develop before plaguing it with the 1-star reviews.

for me, Jules' backstory in the beginning of episode 4, along with the perfect music accompanying it, is the reason for my high rating. i don't think i've ever been moved this much by a tv show.