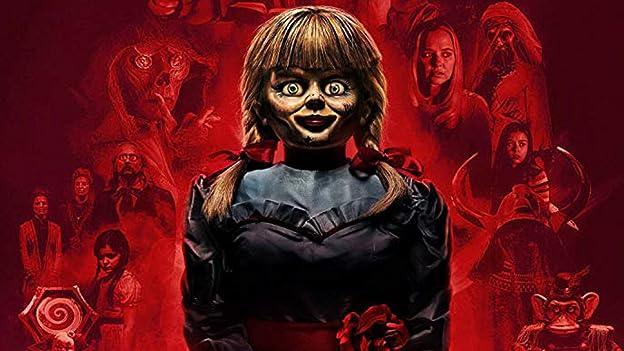 Writer/director Gary Dauberman unveils the new cast of sinister specters he conjured up for the latest installment of the Annabelle film series.

Twelve years after the tragic death of their little girl, a doll-maker and his wife welcome a nun and several girls from a shuttered orphanage into their home, where they become the target of the doll-maker's possessed creation, Annabelle.

A couple begins to experience terrifying supernatural occurrences involving a vintage doll shortly after their home is invaded by satanic cultists.

A priest with a haunted past and a novice on the threshold of her final vows are sent by the Vatican to investigate the death of a young nun in Romania and confront a malevolent force in the form of a demonic nun.

Ignoring the eerie warning of a troubled mother suspected of child endangerment, a social worker and her own small kids are soon drawn into a frightening supernatural realm.

Parapsychologist Dr. Elise Rainier faces her most fearsome and personal haunting yet, as she is drawn back to her ghostly childhood home, where the terror began.

The Lamberts believe that they have defeated the spirits that have haunted their family, but they soon discover that evil is not beaten so easily.

A prequel set before the haunting of the Lambert family that reveals how gifted psychic Elise Rainier reluctantly agrees to use her ability to contact the dead in order to help a teenage girl who has been targeted by a dangerous supernatural entity.

A family looks to prevent evil spirits from trapping their comatose child in a realm called The Further.

Rebecca must unlock the terror behind her little brother's experiences that once tested her sanity, bringing her face to face with a supernatural spirit attached to their mother.

Determined to keep Annabelle from wreaking more havoc, demonologists Ed and Lorraine Warren bring the possessed doll to the locked artifacts room in their home, placing her "safely" behind sacred glass and enlisting a priest's holy blessing. But an unholy night of horror awaits as Annabelle awakens the evil spirits in the room, who all set their sights on a new target--the Warrens' ten-year-old daughter, Judy, and her friends. Written by Warner Bros. Pictures

Possess them all See more »

Rated R for horror violence and terror | See all certifications »

The character of Anthony Rios was created as a proxy for Judy's real life husband, Tony Spera. While she and Spera didn't actually meet until adulthood, Dauberman asked their permission to create the childhood bully character to potentially serve as a romantic interest for Judy if the series continues to follow her character as she grows up See more »

Judy and Mary Ellen do not seem to be aware that the backdoor is unlocked after Daniela sneaks into the house through it and leave it unlocked for the remainder of the film, allowing Daniela and Bob to enter the house later in the film without the protagonists realizing. See more »

Lorraine Warren: [after Ed was almost hit by a truck] EDDDDD!
See more »

The end credits start with a dedication to the real-life Lorraine Warren, who died shortly before this film's release. See more »

To synthetically summarize, I would say that Annabelle Comes Home (2019) is essentially dedicated to young teens. In addition, although it's directed by the padawan Gary Dauberman, do not expect anything original. Nice with low expectation.