TV-MA | Crime, Drama, Mystery | TV Series (2020– )
Episode Guide
9 episodes
0:31 | Trailer
7 VIDEOS | 238 IMAGES
Set in the world of beautiful but bleak Cape Cod, one woman's journey to sobriety is overshadowed by a murder investigation dragging her into its fold.

Jackie and Ray try to return to business as usual after a depressing failure, only to learn the case might not actually be closed.

Jackie and Junior struggle to cope in the wake of a traumatic event. Ray's investigation picks up speed. Ray is there for Renee when she really needs him.

Everybody's Got a Cousin in Miami

When Jackie realizes Junior's involved with Sherry Hunter's murder, she enlists Ray and the entire CCINU to track him down -- before Frankie has him murdered. Renee finds herself deeply questioning ...

What to Watch After 'Hamilton'

Once you've memorized the lyrics to Hamilton, check out these TV shows and movies to enhance your experience.

TV Tracker: Renewed and Canceled Shows
a list of 107 images
updated 2 days ago

May Picks: The Movies and TV Shows You Can't Miss
a list of 33 images
updated 2 months ago

Maybe pile
a list of 43 titles
created 1 week ago

Search for "Hightown" on Amazon.com 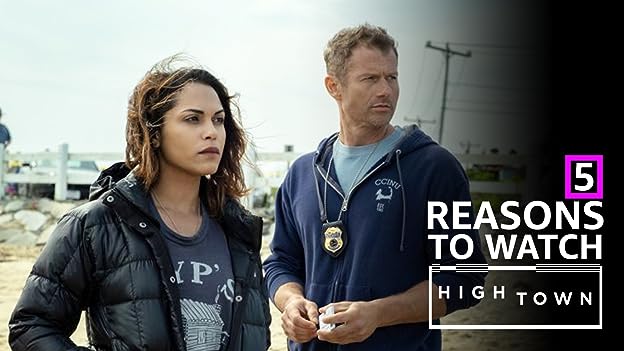 The "Chicago Fire" mainstay Monica Raymund gives her top reasons why you should take the trip to Provincetown in her new STARZ series, "Hightown."

When a grisly murder shocks Los Angeles in 1938, Detective Tiago Vega and his partner Lewis Michener become embroiled in an epic story that reflects the troubled history of the city.

In booming 1932 Los Angeles, a down-and-out defense attorney takes on the case of a lifetime.

Seven years after the world has become a frozen wasteland, the remnants of humanity inhabit a perpetually-moving train that circles the globe, where class warfare, social injustice and the politics of survival play out.

Based on the novel by Pulitzer-winner Annie Proulx, BARKSKINS follows a disparate group of outcasts who must navigate brutal hardships, competing interests, and tangled loyalties at the crossroads of civilization- late 1600s New France.

Teenager Courtney Whitmore joins the Justice Society of America. Based on the character from DC Comics.

Anna Kendrick stars in a fresh take on a romantic comedy anthology series about the journey from first love to lasting love, and how the people we're with along the way make us into who we ... See full summary »

Two ex-lovers, a married American woman and an aspiring British writer, activate a long-planned escape plan and disappear together for a week. They soon get into trouble and a female cop goes after them.

Explores the darkest corners of the male psyche through the eyes of two fathers, one of whom is a serial-killer.

"Hightown" is set on iconic Cape Cod, and it follows one woman's journey to sobriety, intertwined with an unfolding murder investigation. Jackie Quiñones, a hard-partying National Marine Fisheries Service agent, has her free-wheeling life thrown into disarray when she discovers a body on the beach - another casualty of Cape Cod's opioid epidemic. As a result of this trauma, Jackie takes the first steps toward becoming sober - until she becomes convinced that it's up to her to solve the murder. Now at odds with Sergeant Ray Abruzzo, an abrasive but effective member of the Cape Cod Interagency Narcotics Unit, Jackie starts to spiral. And she's not alone. Ray, too, spins out of control; losing himself in the investigation. The lives of everyone connected to this murder crash and converge, reminding us just how complicated - and deadly - our addictions can be.

Welcome to the Cape

In 1984, Mike Pniewski who plays Ed Murphy in this; starred in 'Beverly Hills Cop' with Eddie Murphy! See more »

Murder, drug addiction, sex.......whats not to like? Once you actually watch the show,you'll see this gets very interesting. The story is layered , and the character development is well done.

Q: PTown & Monica Raymond in the same show?! When will this premiere?
See more »
Edit