Releases February 7, 2020
After splitting with the Joker, Harley Quinn joins superheroes Black Canary, Huntress and Renee Montoya to save a young girl from an evil crime lord.

The Props Sundance Stars Wish They Stole From Set

Find out which props Sundance stars would have taken home from their sets ... and who might have lifted an item or two.

Search for "Birds of Prey" on Amazon.com 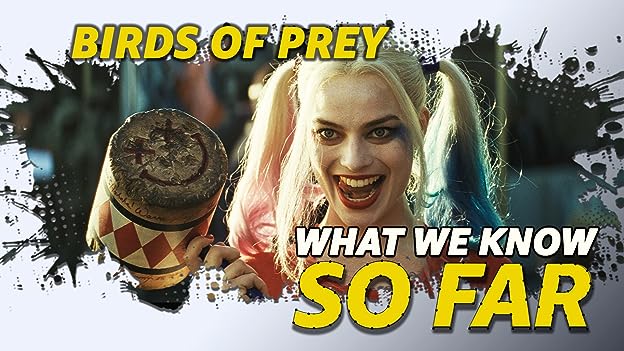 Margot Robbie's Harley Quinn is finally getting her own movie - and the Joker is nowhere in sight. Here's what we know about Birds of Prey ... so far.

Next »
The Suicide Squad (2021)
Action | Adventure | Fantasy
Not yet released

Next »
Blumhouse's Fantasy Island (2020)
Adventure | Comedy | Horror
Not yet released

Following three of Gotham City's most notorious female criminals on one of their most dangerous missions yet.

A criminal love story between Harley Quinn and the Joker.

Birds of Prey: And the Fantabulous Emancipation of One Harley Quinn See more »

Live-action debut of Cassandra Cain. She is the first character to have a solo ongoing series as Batgirl in 2000. Cain has also taken the aliases of Black Bat, Kasumi and currently, Orphan. See more »

Harley Quinn: I'm the one they should be scared of! Not you, not Mr J! Because I'm Harley Freaking Quinn!
See more »

The Warner Bros and DC Comics logo appear against a background of red and blue, Harley's hair colors. See more »

Q: Why are they not using Anthony Carrigan from "Gotham" as Victor Zsasz?
See more »
Getting Started | Contributor Zone »