Editors' Picks: Streaming on Disney Plus
a list of 23 images
updated 4 days ago

Why Tom Holland and Chris Pratt's Brotherly Love Is Real 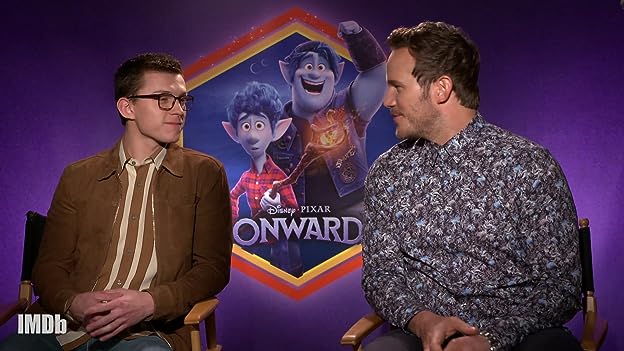 Onward stars Tom Holland and Chris Pratt share how their time as fellow Marvel superheroes prepared them well for their roles as brothers in Pixar's latest movie.

The Manticore is lifted straight from Dungeons & Dragons. Present since Advanced Dungeons & Dragons in 1977, manticores exist as an evil race of lion-like creatures who seek to EAT THE FLESH OF MEN. They are lethal predators, as detailed in the short story "The Ecology of the Manticore" written by Spike & Jones and published in the 153rd issue of the official Dungeons & Dragons magazine, Dragon. Persian mythology the name "manticore" derives from Middle Persian for "man-eater" (mardya and khrowr) manticores have humanoid heads, lion bodies, scorpion tales, and dragon wings. See more »

Barley Lightfoot: There's no top half! I definitely remember Dad having a top half!
See more »

Aside from the opening logos and the opening main title, there are no "Disney presents" nor "A Pixar Animation Studios Film" being inserted. See more »

I was excited going into Onward because Pixar are one of the only studios making movies today that consistently deliver. Not all of them are as great as some of their classics, but I have never had a bad experience watching a Pixar film and almost all of them are great. Some of them are down-right masterpieces.

Onward isn't a masterpiece, but it's close to being one. At the heart of the story are two brothers, voiced excellently by Tom Holland and Chris Pratt. Their voices brought to much energy to the characters, and the dynamic between the two of them was electrifying and engaging.

The overall story of Onward is nothing ground-breaking, but it is immensely entertaining and there was never a dull moment. This isn't my favourite Pixar film, but it's definitely up there. The musical score was heart-pounding and added to the tension in all the right places.

All of the characters, especially the two brothers, have a very significant arc in the film and it was a pure joy to watch on-screen. The ending is also the most emotional I have been in a Pixar film since the inferno scene at the end of Toy Story 3, almost a decade ago. When you understand what the actual message of the story is, behind the road-trip adventure they go on, it will move you and grab you by the heartstrings.

The pacing didn't always flow as well as I would have liked in the first act, and there were a couple of real-world elements which I had to suspend too much disbelief for, but overall this is an absolutely incredible film and I can't wait to see it again.