The Dark Crystal: Age of Resistance

TV-PG | 1h | Adventure, Drama, Family | TV Series (2019)
Episode Guide
10 episodes
2:37 | Trailer
14 VIDEOS | 75 IMAGES
Return to the world of Thra, where three Gelfling discover the horrifying secret behind the Skeksis' power, and set out to ignite the fires of rebellion and save their world.

She Knows All the Secrets

A missing Landstrider herd and an unexpected visit from the Skeksis put the All-Maudra on edge. Aughra summons Rian and the others to Dream Space.

At the Circle of the Suns, the weary travelers receive an unsettling surprise - and a lesson in Thra's history. The Emperor recruits a new army.

A Single Piece Was Lost

As the Gelfling and the Skeksis prepare for a fateful battle, the Scientist starts work on a new secret weapon.

TV Tracker: Renewed and Canceled Shows
a list of 121 images
updated 2 days ago

8 Reveals From Our Set Visit to "The Dark Crystal: Age of Resistance"
a list of 9 images
updated 20 Aug 2019

Search for "The Dark Crystal: Age of Resistance" on Amazon.com

Prequels, Sequels, and How the New "Dark Crystal" Fits In 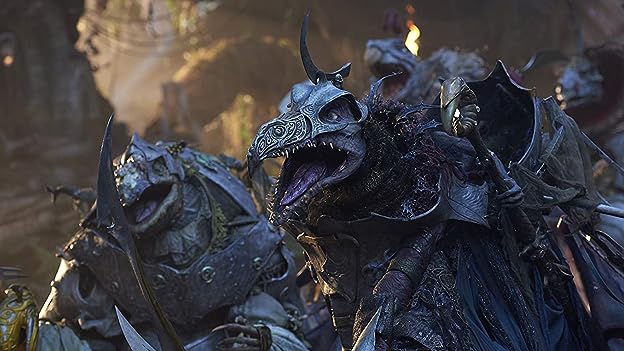 Jim Henson's other beloved puppet franchise just returned as a stunningly intricate 10-part prequel. On this IMDbrief, we explore the ever-expanding world of the Dark Crystal.

Another world, another time, another age. The Crystal of Truth, heart of the planet Thra, is controlled by the cruel and cunning Skeksis who use its power to bend the planet's will and subjugate The Gelfling: the gentle and kind creatures who will start the Age of Resistance and thwart their masters' schemes. Written by Johnny

Before Netflix green-lit the show, the executives asked for a proof-of-concept screen test. A scene in which a Gelfling discovered a Podling being drained of its life essence by the Skeksis Scientist was filmed on the Henson lot in Hollywood. At this time the subtitle of the show was "Age of Rebellion" rather than "Resistance". The Podling and Skeksis were filmed as puppets, but the Gelfling was fully computer generated. The test proved that a fully CG Gelfling would look out of place, but visual effects house DNEG (Double Negative) could be used to enhance the puppet performances with subtle additions such as blinking eyes or a slight smile. The official green light was given in March of 2017. See more »

Why aren't more fantasy movies/series like this? It's unique, beautiful, moving and enthralling... It's evident that so much effort and attention to detail has been put into every little thing; the costumes, the sets, the voice acting. I am so glad one of my favourite childhood movies has been brought back and I hope the younger generation will learn to appreciate it as well. Not everything is better with tons of CGI. Brian Froud and Jim Henson are a fantastic duo.

Q: Should i watch movie "The Dark Crystal (1982)" before this one, is it necessary to understand the story?
Q: Are skekLach and urSen male or female? skekLach is referred to as male in a different work but has a female voice in this series.
Q: skekEkt is voiced by a man in the film and by a woman in the series. What is their gender if they have one?
See more »
Edit