Ramin Bahrani (written for the screen by), Aravind Adiga (based on the book by)

The "Most Anticipated New Indian Movies and Shows" widget tracks the real-time popularity of relevant pages on IMDb, and displays those that are currently generating the highest number of pageviews on IMDb.

Search for "The White Tiger" on Amazon.com 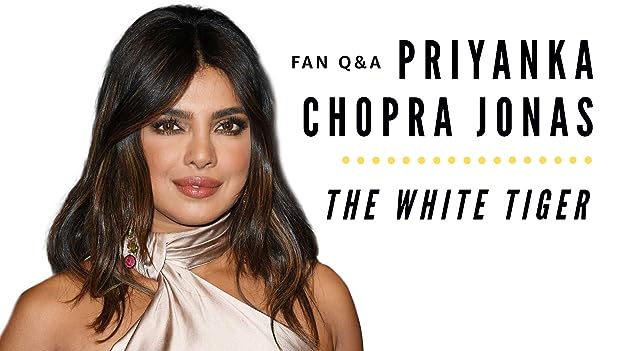 Priyanka Chopra Jonas shares recommendations for must-watch TV, the Indian dish she consistently craves, the musical she'd love to star in, and what it was like working with Rajkummar Rao in The White Tiger.

Balram Halwai (Adarsh Gourav) narrates his epic and darkly humorous rise from poor villager to successful entrepreneur in modern India. Cunning and ambitious, our young hero jockeys his way into becoming a driver for Ashok (Rajkumar Rao) and Pinky (Priyanka Chopra-Jonas), who have just returned from America. Society has trained Balram to be one thing - a servant - so he makes himself indispensable to his rich masters. But after a night of betrayal, he realizes the corrupt lengths they will go to trap him and save themselves. On the verge of losing everything, Balram rebels against a rigged and unequal system to rise up and become a new kind of master. Written by Netflix

When Balram was narrating the story about Chinese president traveling to India and meeting Manmohan (Ex-PM of India) there was a glimpse of printing INR 2000 currency note. However, INR 2000 denomination came after demonetization in 2016, while the story takes place in early 2010. See more »

Balram: I don't give it to you because I need to, but because I want to.
See more »

This movie reminds me of Oscar Winning 'Parasite'. How poor people take advantage of rich ones, is the centre of storyline in both the movies. White Tiger is throghly an enjoyable movie and 1st half is so engaging. The end is still questionable because the movie ends on a negative note. So 7/10 otherwise.. i was thinking about giving 8/10. need more such unique movies.

Q: How did the crew members got their hands of old 500 notes?
See more »
Edit