October Picks: The Movies and TV Shows You Can't Miss
a list of 12 images
updated 5 months ago

Hoping to get to Eventually...
a list of 42 titles
created 11 months ago

Search for "Jay and Silent Bob Reboot" on Amazon.com

Jay and Silent Bob Test Their Friendship With a Reboot 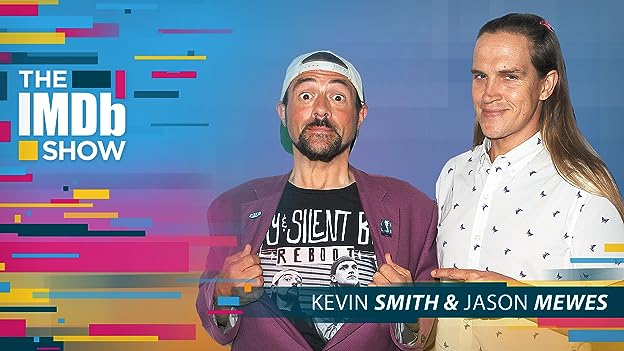 Kevin Smith and Jason Mewes put their longtime partnership to the test for Jay and Silent Bob Reboot.

The comic "Bluntman and Chronic" is based on real-life stoners Jay and Silent Bob, so when they get no profit from a big-screen adaptation, they set out to wreck the movie.

A calamity at Dante and Randal's shops sends them looking for new horizons - but they ultimately settle at the fast food empire Mooby's.

Both dumped by their girlfriends, two best friends seek refuge in the local mall.

An abortion clinic worker with a special heritage is called upon to save the existence of humanity from being negated by two renegade angels trying to exploit a loop-hole and reenter Heaven.

A day in the lives of two convenience clerks named Dante and Randal as they annoy customers, discuss movies, and play hockey on the store roof.

Holden and Banky are comic book artists. Everything's going good for them until they meet Alyssa, also a comic book artist. Holden falls for her, but his hopes are crushed when he finds out she's a lesbian.

Two teenage yoga enthusiasts must do battle with an evil presence that is threatening to rise from its underground lair and endanger their major party plans.

Rated R for pervasive strong crude sexual content, language throughout, drug use and some nudity | See all certifications »

This is the first collaboration between Kevin Smith and Ben Affleck since Clerks II (2006). They had a falling out which lasted almost a decade, with Smith confessing that he "has a big mouth and told too many candid stories that sometimes weren't his to tell". In early 2019, Affleck was interviewed for Triple Frontier (2019) where he indicated that he had not been contacted for Jay and Silent Bob Reboot (2019), but would be available. Smith subsequently reached out to Affleck, and stated that their reunion was "emotional" and "brought back a massive missing piece of my heart". He wrote Affleck's part (a reprise of his Holden McNeill role from Chasing Amy (1997)) into the movie one week before the end of production, with the scene shot on the very last day. Smith called the scene "one of the best bits of cinema I've ever been involved with: it's absolutely magical and life-affirming and all the things I really care about now, post-heart attack." See more »

Reboot Chronic: Let me be blunt, man. I liked you better when you were silent, Bob.
See more »

There is a short tribute to Stan Lee Lee during the credits. See more »

Q: Is the "Jay and Silent Bob Reboot" actually a reboot?
Q: What does Shan Yu say in Chinese ?
See more »

I thought this movie was fun, emotional and packed with familiar faces. Saying it was a rehash of Kevin Smith movies was sorta the whole point of this movie. It was fan service and being a fan, I thought it was great!!! I've been waiting for Kevin to make this movie for a long time since I wasn't a huge fan of Tusk or Yoga Hosers (but I did like Jersey Girl!). This is a true View Askew piece of cinema IMHO!