PG-13 | 2h 1min | Drama, Music | 16 October 2020 (USA)
2:29 | Trailer
4 VIDEOS | 53 IMAGES
Young musician Zach Sobiech discovers his cancer has spread, leaving him just a few months to live. With limited time, he follows his dream and makes an album, unaware that it will soon be a viral music phenomenon.

to F.B
a list of 36 titles
created 5 months ago

Search for "Clouds" on Amazon.com 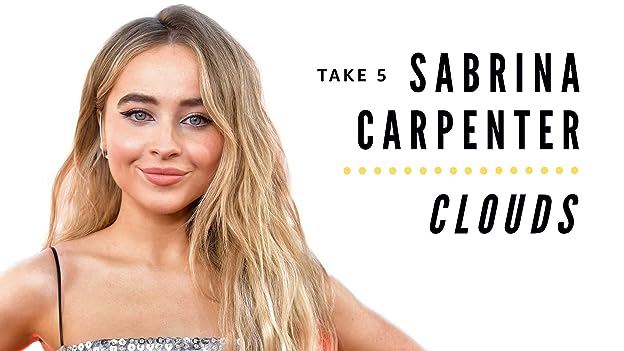 Clouds star Sabrina Carpenter shares the on-screen musical moment that blew her mind, her dreams to work with her talented BFF, and the teen that inspired her growing up.

Seventeen-year-old Zach Sobiech is a fun-loving high school senior with raw musical talent. But a few weeks into his senior year, just after asking out his long-time crush, Zach's world gets turned upside down when he finds out his cancer has spread, leaving him with a life expectancy of just six months. With the limited time he has left, he and his best friend and writing partner, Sammy, decide to follow their dreams and finally make an album. Little do they know, they'll soon become a viral music phenomenon. But with time running out, Zach is confronted with the reality that no matter how he spends his time, he is going to hurt the people he loves the most, including Amy, the love of his life. As Zach's health condition begins to worsen, he is left to make difficult decisions about how to spend his time and more importantly with whom. Ultimately, he discovers the best way to say goodbye is with music, and his hit song CLOUDS is born. With an unfiltered, heartbreaking, and beautiful ...

A young musician with months to live turns to music to make the most of the time he has left. See more »

This movie was based on Laura Sobiech's memoir "Fly a Little Higher: How God Answered a Mom's Small Prayer in a Big Way" published in 2014. See more »

Despite being co-produced by Warner Brothers, there is no Warner Shield logo in either the opening or closing credits. Only an in credits notice saying A Warner Brothers Presentation. See more »

Almost Too Emotional, but Still Very Well-Done
21 October 2020 | by kjproulx – See all my reviews

Sometimes familiar stories and films with imperfections can even break through the mould and impress you. Recently released to stream on Disney+, Clouds is one of the most emotional films I've seen all year. Being based on a true story helped it in that regard, but the subject matter alone is what makes this film work so well as a cohesive film. Due to the nature of how this film was released, there probably won't be any awards consideration, and that's okay because I believe that if you stripped away the emotional core from this film, you'd have a pretty standard drama that you've seen a million times. With that said, here's why Clouds stands out as a very well-done true story.

Based on the true story of Zach Sobiech (Fin Argus), Clouds follows him as he grapples with the fact that he only has a few months left to live. With this limited time, he chooses to make light of every scenario that he can, all while continuing to write and perform music in order to leave behind a legacy. With his best friend Sammy Brown (Sabrina Carpenter) by his side every step of the way and his new girlfriend Amy Adamle (Madison Iseman) doing the best she can to be there for him, every bit of this film is littered with emotional moments. Whether it be a new revelation about his condition or something his family did for him, I found myself in tears on multiple occasions. These aspects are both the strongest and weakest parts of the film as a whole though.

Yes, I cried throughout the majority of this film, due to the great performance by Fin Argus and the fact that the screenplay by Kara Holden hit all the right chords for me. This is also where I have to make my one big complaint though. Yes, this entire film is tastefully done in every way, but the heartstrings of the film are pulled on nearly every five to ten minutes and even though it usually works, it just felt like a lot. Due to how strong the real-life story was, this film hinged on that alone, making for both a sad and repetitive watch. With that said, while watching the film, I did not feel this at all. I only thought the emotion was focussed on too much upon reflection, so I can't see that being a complaint for many viewers.

Director Justin Baldoni also has a huge knack for directing films that are driven by a very heavy, emotional narrative. Although I really haven't seen much of his television work, I really enjoyed his feature film debut with 2019s Five Feet Apart. That film, much like this one, uses the emotional core of the story a little too heavily, but I found that it worked really well as an experience. Baldoni is a director that likes to let scenes drag on a bit and let the emotion linger, which I really appreciated about this film in particular. It can feel long at times, but that also felt like a reflection of how cancer speeds things up in a sense. I really enjoyed watching this film due to his direction.

Overall, Clouds is a far better film than I was expecting it to be. Quite honestly, upon first viewing of the trailer, I had no prior knowledge of this true story or the music that made him famous in real life. For that reason alone, I think I appreciated the film even more. Never once did I feel the film dive into cliched territory because it all felt authentic and true. If for nothing else, Clouds is absolutely worth watching if you like a good cry when watching a film. It absolutely tugged at my heartstrings and I feel that many viewers will have that same experience. Clouds is now streaming on Disney+.