In the revolution's aftermath, Layton and Melanie realize the greatest threat to their survival is right over their shoulder.

The rebel forces are on their heels when a dangerous foe joins them; a plan is hatched to take the train, but it may destroy them all.

These Are His Revolutions

How many episodes of Snowpiercer have you seen?

Search for "Snowpiercer" on Amazon.com

What to Watch If You Love "Snowpiercer" 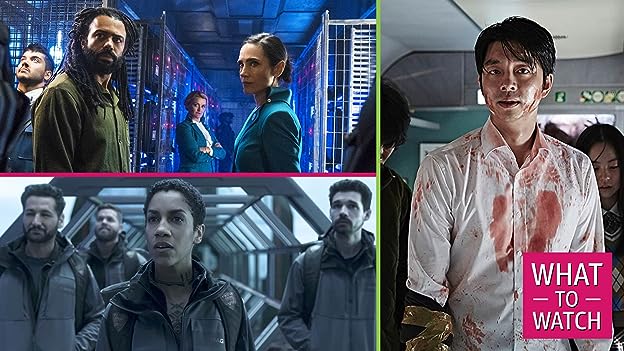 With TNT's new take on the "Snowpiercer" story chugging along, discover other movies and TV shows that make the perfect companions or follow-ups to add to your Watchlist.

After waking up in a morgue, an orphaned teen discovers she now possesses superpowers as the chosen Halo Bearer for a secret sect of demon-hunting nuns.

Set seven years after the world has become a frozen wasteland, Snowpiercer centers on the remnants of humanity, who inhabit a gigantic, perpetually-moving train that circles the globe. Class warfare, social injustice and the politics of survival are questioned in this riveting television adaptation. Written by TNTDrama

In one episode, it was stated that they had made 18 revolutions in 7 years. If they were at the equator, that would mean they travel at about 7 miles per hour if you do the math. See more »

Don't be misled by the reviews. This show is interesting and leaves you wanting to know more about the setting. Is it an award winner - no. Is it entertaining and suspenseful - yes. Does the intrigue make you want to keep watching - absolutely. I read the user reviews before watching but decided to give it a shot regardless of the low ratings because I was I intrigued by the concept. I haven't watched the movie nor have I read the source material. I've now watched 4 episodes and I'm hooked. To enjoy this show you first need to accept that the premise is unrealistic. What it does accomplish is a very interesting analogy of classism. Many people seem to dislike the police procedural plot. I enjoyed it and I think it succeeds as being a plot device to give the audience a tour of the train from the perspective of someone in the lowest class, while showing the massive injustices between the haves and the have nots. Give Snowpiercer a chance if you enjoy dystopian genres and you aren't too picky about technical realism but want something that will make you think about the ugliness of wealth privilege.

Q: On which channel can you see this TV series?
Q: Why, on DISH anyway, is it listed as Season 3, Episode 1? While on IMDB, and as far as I can tell from the commercials, it's the Series Premiere.
See more »
Edit