March Picks: The Movies and TV You Can't Miss
a list of 22 images
updated 1 month ago
Create a list » 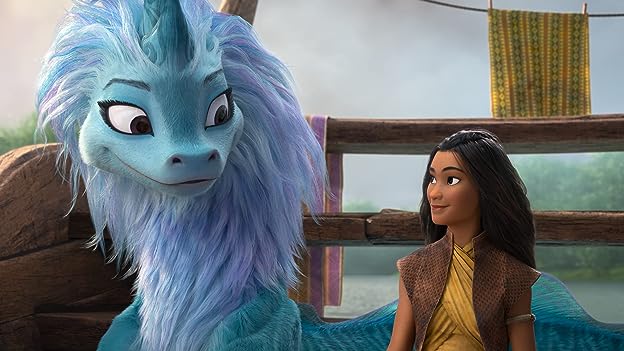 In South East Asian cultures in particular and Asian cultures in general, it's considered very rude to address people who are older or in higher status than you with only their names, such as when Raya calls Tong or Boun calls Raya or Raya calls Sisu (a deity-like figure) with their names only. In Asian cultures usually you would address people using familial relationship: you would call a person who is around your age or slightly older than you with "brother/sister", person who is in the range of your parent's age with "uncle/auntie", person who is older than that with "grandpa/granny", and revered/high status/deity figure with something like "master/lord/lady". So Raya would call Tong "Uncle Tong", Boun would call Raya "Sister Raya", and Raya would address deity-ish Sisu as "Master Sisu" or "Lady Sisu". See more »

Boun: How hot do you want it? We have hot, really hot, and "Boom goes the dynamite!"
Sisu: Bring on the heat!
See more »

The movie looks great but there were so many weird decisions with the story. Humor was flat in many cases reminding me of 2010s vine humor where the joke is so on the nose its cringey and then the "funny part" is the person explaining the joke

Character development was non-existent and characters did whatever they wanted. In one scene you had a ninja baby that could sneak through an entire city and take out guards to leave a note, followed by the main character having a realistic MMA fight with the villian. No coherence between scenes but hey look cute baby face