Are You Team Godzilla or Team Kong? 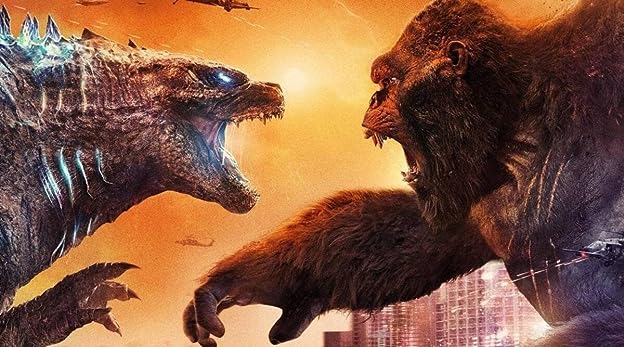 The Godzilla vs. Kong cast — featuring Alexander Skarsgård, Millie Bobby Brown, Eiza González, and more — got up close and personal with the titular twosome, and now they're ready to reveal where their allegiance lies.

Adam Wingard offered James Rolfe (best known as the Angry Video Game Nerd) a cameo in the film, but he declined due to the impending birth of his second child See more »

Hollow Earth would be by the Earth's core, thousands of miles deep. They enter from a portal in Antarctica. And yet, Godzilla later in the movie burns a random hole in the ground in HK deep enough to reach it, roars through it and Kong hears it, and he easily climbs it to poke back to the surface. See more »

Bernie Hayes: Is that a password?
Josh Valentine: I don't know! I'm not used to this. I'm used to pirating movies online.
See more »

The opening credits are a montage of Monarch records and monitors showing Godzilla and Kong's battles. All text on these documents are blacked out except for the names cast/crew members.

The montage ends with a zoom into the Earth, from which the title appears. See more »

Three colossal blockbuster movies, Godzilla (2014), Kong: Skull Island (2017) and Godzilla: King of the Monsters (2019) have set the pace for Godzilla vs Kong (2021). After years of waiting these two iconic characters to appear on the big screen facing off one another, this long-awaited sequel is finally here to rumble but will it be a gigantic pay off or a gargantuan turn off?

Question #1: Are there a lot of action-packed scenes?

I know the majority of the audience who wants to watch this film is expecting a non-stop action packed scenes. With a runtime of approximately 1 hour 52 mins including credits, the film offers a few action scenes but not as plenty as to how the critics are referring to. I feel that Kong: Skull Island and Godzilla: King of the Monsters offer more action scenes than Godzilla vs Kong though this latest film is not left far behind as the final act provides a visual pleasing jaw-dropping fighting scenes. As my expectation is high, to say that the film offers 'enough' action scenes is an overstatement but it still manages to be enjoyable overall.

Question #2: Are there any fighting monsters other than Godzilla and Kong?

Yes, there are a few but it serves more as a filler than getting a part in the main storytelling. Without mentioning which or who, there is an appearance of a monster during the final battle of the movie but I feel that there is much more that can be done with it. It lacks any development and it is hard not to think that the monster is there just to be there without moving forward its story or origin. It leaves an impression that other than Godzilla and Kong, other monsters serve mainly to remind the audience that this is a Monster Verse.

Question #3: Is the visual effect as outstanding as what the critics are saying?

Oh yes, the visual effect is outstanding. You can witness the figure of the monsters with dazzling spectacle. It feels very much real and alive and it is difficult to spot the flaws in terms of its visual. I can bet high that this film will receive a nomination for next year's awards like Oscars and Golden Globes for Best Visual Effects of the year.

Question #4: What do I like about Godzilla vs Kong?

The best thing about Godzilla vs Kong for me is the cinematography during the ongoing action scenes. It lets you witness the event by means of a point-of-view technique as if you are about to go to an amusement park ride. It is effectively entertaining, it buckles you on your seat to let you experience the ride and immerse yourself in the experience. The choreography of the action scenes between the monsters is also left to be amazed. It shows you never-before-seen battle movements that are eye-pleasing to watch alongside the color palette which is mesmerizing, it is hard not to think the Pacific Rim universe when you see the colorful and bright neon lights showering the Monster Verse world. I also love the intrinsic and humane expression of Kong and the grisly horrific images of Godzilla, it shows both ends of spectrum, complementing Yin & Yang.

Question #5: What do I dislike about Godzilla vs Kong?

Other than what I feel that it contains only a few action scenes, the plot moves towards uninteresting territory. This is the problem with the Godzilla films for me, instead of capturing the audience with an appealing plot, it shows you on the process of fighting against or helping the monsters. It establishes the idea to guide you through the journey of survival if we were being attacked with the monsters which sets aside its storytelling. I get it, it is a film about fighting monsters but there is a reason why the first Godzilla film does not receive much appraisal as it lacks both storytelling and action scenes. Furthermore, I also feel that the middle part of the film feels a bit draggy and over-the-top ridiculous with no sci-fi boundaries. I also feel disengaged by the chemistry between Godzilla and Kong because it seems that there were there to only fight without a proper explanation. Godzilla is only present when he is about to battle, no more and no less.

Question #6: Who should watch Godzilla vs Kong?

Question #7: Is there any end credits scene?

Unfortunately, there is no end credits scenes after or during the credits roll.

Question #8: Rate the Monster Verse films from Best to Good (There's no worst, every film is entertaining and good.)

Verdict: Godzilla vs Kong sets to shake the world with its massive fighting scenes and dazzling visual effect and while those succeed, it seems that the roaring rumble is stepped down by the lack of action scenes in the first two acts and the uncharted exploration of its mythology that makes Godzilla vs Kong an only substantially sizeable monster mayhem film.
148 of 309 people found this review helpful.  Was this review helpful to you? | Report this
Review this title | See all 1,856 user reviews »

Q: Why didn't Nathan Lind recognize Ren Serizawa as he once was with Monarch?
Q: Why do people still consider Godzilla a "protector of Earth" when he attacked Kong on the sea unprovoked, thus killing dozens and dozens of innocent people on the ships.
Q: Does this take place in modern day, how come nobody is wearing masks?
See more »
Edit