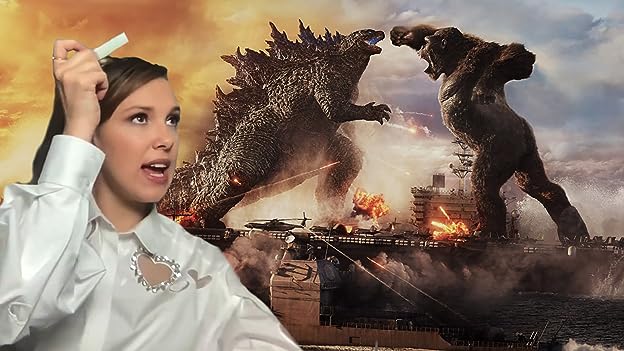 While shooting Godzilla vs. Kong, the titans were often represented by tennis balls or lasers, so the cast and director explain how they were able to breathe life into those seemingly impossible scenes.

Our Fate. Their Fight. See more »

Julian Dennison described his character as a "nerd" and Madison as his "only friend". Dennison called Josh the "realist in the duo", stating, "he kind of brings it, 'Oh, we shouldn't do that because we'll die.' And she's, 'No, it will be fine.' So, I think they play very well. And they're a very good mix of just craziness". See more »

The opening credits give us numbers for Godzilla: he's 393 feet tall and weighs 164,000 tons. A Nimitz-class carrier weighs at most 117,000 tons. Godzilla alone outweighs the carrier. The carrier should have immediately capsized the moment Godzilla tried to climb on to fight Kong. See more »

Madison Russell: There's something provoking him that we're not seeing here.
See more »

The opening credits are a montage of Monarch records and monitors showing Godzilla and Kong's battles. All text on these documents are blacked out except for the names cast/crew members.

The montage ends with a zoom into the Earth, from which the title appears. See more »

Token child actor under 10 getting more screen time than Godzilla or Kong. (Tick) Boring/stupid plot (Tick) Little girl teaching Kong sign language..PLEASE!! Some of us have an IQ over 60. Stop assuming the audiences is going to be full of idiots.

Horrible acting (Tick) Name one decent performance in this movie, i dare you to find one.

Worth the watch but honestly you could basically just skip straight to the battle scenes and it will make NO difference plot wise. You will be missing absolutely nothing.

If you guys just listened to the reviews, the results would be amazing. Go back to the Godzilla/Kong roots. Not this modern Hollywood crap that's tailored for the mentally imapired.

Q: Why does the researchers walk around Hollow Earth at the end without getting attacked by the thousands and thousands of monsters there?
Q: Is this film a sequel to 'Kong :Skull Island' ?
Q: Is this a "remake" or the original or a completely new "re-telling?"
See more »
Edit