After Tig tells the story of their seemingly-unmanageable work situation to their radio audience, Tig and Kate's relationship takes a new turn. Bill makes an impression at a wedding. Bill and Remy ...

Bill's cat escapes and he blames Tig for letting her out. Tig's biological father, Mick, leads a search party. Assigned to survey the neighborhood, Tig unearths a secret from Caroline's past. Having ...

Tig and Jessie explore the limits of living in the moment. Attempting to connect, Bill attempts to organize a family dinner with Tig and Remy. Remy clumsily pursues a female member of his Civil War ...

Search for "One Mississippi" on Amazon.com

Tig Notaro Takes You on a Dolly Parton Death Trip

Stand-up comedian Tig Notaro has a great idea for a short film that involves a road trip, a Dolly Parton song, and ... a bear? We bring her vision to life on "UnMade." 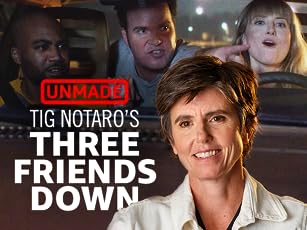 Hit the Road With Tig Notaro

This semi-autobiographical dark comedy starring Tig Notaro follows her as she returns to her hometown after the sudden death of her mother. Still reeling from her own declining health problems, Tig struggles to find her footing with the loss of the one person in her life who understood her. All while dealing with her clingy girlfriend and her dysfunctional family. Written by Anonymous

When asked about the show' true-to-life elements, Tig Notaro stated that the pilot was "85 percent factual." The show became more fictionalized as the episodes progressed, but the writers would frequently reflect on experiences from their own lives to be incorporated into the scripts. See more »

Dark humor, but we can all relate
30 September 2016 | by irenemase – See all my reviews

My mother recommended this show. The setting is local life in coastal Mississippi, with all the family problems that go along with it. Tig comes home to deal with her mother's death as a sick and broken woman who seems lost in life. She finds a chance to reconnect with her family and community as she comes to terms with a difficult childhood. In a quest to learn about who her mother really was, she finds out more about herself. The fact Tig is struggling with cancer and other illness brings a grounding sobriety to the awkward situations she faces in the vibrant community. I love that the city of "Bay St Lucille" so closely resembles a real coastal city in Mississippi. The only problem I have is there needs to be more seasons to watch.