February Picks: The Movies and TV Shows You Can't Miss
a list of 23 images
updated 4 months ago 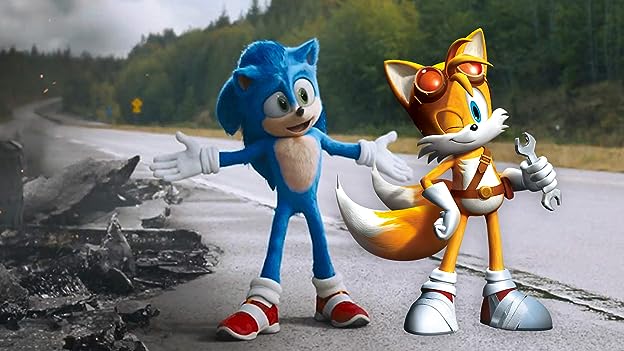 Teen Miles Morales becomes the Spider-Man of his universe, and must join with five spider-powered individuals from other dimensions to stop a threat for all realities.

According to animator Max Schneider, Paramount expected that Sonic fans would object to the redesign but that general audiences would not care, as had been the case with Teenage Mutant Ninja Turtles (2014). He said Paramount felt the design gelled with the real-world setting and characters. See more »

Sonic The Hedgehog is an action comedy movie based on the SEGA video game series of the same name. Starring James Marsden and Jim Carrey, it is a fast-moving adventure (obviously) that should entertain newcomers and keep fans of the original series satisfied.

In the small town of Green Hills, Montana, a blue anthropomorphic hedgehog named Sonic (voiced by Ben Schwartz) lives in hiding after being forced out of his original dimension due to his powers of super speed. After accidentally causing a blackout throughout the whole area, Sonic attracts the attention of Dr. Ivo Robotnik (Jim Carrey), an eccentric evil genius whom the government has hired to track Sonic down for experimental purposes. Now on the run once again, Sonic enlists the help of local police officer Tom Wachowski (James Marsden) to aid him in avoiding capture and hopefully make a new friend in the process.

Even if you aren't a hardcore fan of the series, Sonic The Hedgehog provides a nice amount of fun action and quirky humour to draw in even the most casual of moviegoer. I myself was a Nintendo kid growing up, preferring to play as the Italian plumber instead of the blue hedgehog, but SEGA and their mascot character always had my respect for being worthy rivals during the video game wars of the 90s, and the same can be said for this. In fact, this film seems to strongly acknowledge Sonic's 1990s roots, from his love of chili dogs to listening to music on a boombox. Of course, there are some references to modern trends but they are kept to a minimum likely so that the film will age better.

Jeff Fowler, who makes his directorial debut for a feature film, does a fine job juggling his storytelling duties with showing off some solid special effects along the way, especially on Sonic himself. It is well known by now that Sonic's original design for this film was poorly received by the public so it was decided that his overall look would be changed. This worked well in the film's favour as not only does he better resemble his video game self, but he even feels more naturally integrated into the real world. We watch as Sonic dashes around causing mischief and escaping danger through different environments like the big city or the quiet countryside, deriving enjoyment along the way. This led to some amusing Quicksilver/Deadpool-esque moments which provided great comic relief during several action scenes.

Comedian Ben Schwartz was a great pick to provide the voice and motion-capture of Sonic himself, both emanating the character's trademark cocky attitude while also showcasing his loneliness and longing for true friendship. This, in turn, makes him more relatable to the audience and causes him to have more human traits than some of the actual people in the film. James Marsden also gave a likeable performance as Tom Wachowski, not merely being relegated to the straight man role but also having his fair share of funny moments as well. However, it is Jim Carrey who steals the show as Dr. Robotnik. I'm not sure whether it was seeing how perfectly tailored the character was to his comedic talents or if it was just how nostalgic it felt to see him acting like his over-the-top 90s self again, but virtually everything he said and did had me laughing out loud. I hope we will see more of Carrey's portrayal of the character in the near future, which reportedly he has expressed interest in doing.

In the end, even though the film isn't groundbreaking by any means, it still provides much needed entertainment thanks to its respectful take on the source material that, like POKÉMON Detective Pikachu before it, definitely feels more like how video games should be handled for the big screen treatment. There is certainly potential for other game franchises to be adapted into movies with a similar style and it is starting to feel as though the "video game curse" may be fading away altogether. There are two bonus mid-credit scenes worth staying back for, and while they aren't of Masahiro Sakurai approaching Sonic about the Smash initiative, they should excite fans of the series just as much.

Q: Will Sonic look more like his Film Style Guide 2D design?
Q: Is Sonic's origin in the movie inspired by Superman's origin?
Q: Will there be comedy?
See more »
Edit