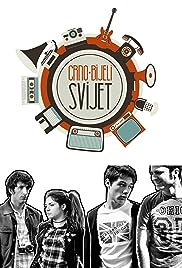 This show is about a time in former Yugoslavia, mostly City of Zagreb at the end of 70' and beginning of 80'. In a dramatic and humorous way it tries to describe a life of this great ... See full summary »

Search for "Crno-bijeli svijet" on Amazon.com

A comedy about five young adults who happen to live in the same building and gather in a pub called "Bitange i princeze".

Follows the intertwining stories of four strangers who are bound together by a violent event.

The last independent newsroom in the country is taken over by a construction magnate for the reasons that have nothing to do with love or respect for journalism.

Lucija Car, a young journalist, stubles upon a prison cemetery full of mysteries, when she does a reportage of that prison.

Series of events leading to football fans war on the streets of Belgrade.

Follows the life of the Kosmicki household - father Marko, head of the family, his wife Ruza and their three children - Dudo,Biba and Neno.

Sunday Morning, Saturday Evening is a sitcom taking place in a neighborhood. The humor is not too nice, the protagonists are not too typical and the situations not too usual. It is hard to ... See full summary »

The main character Struja (Stream) is an unyielding rock musician in a demo-band called When Dirty Harry Met Dirty Sally. Struja would do anything to gather money to record the album as ... See full summary »

Four neighborhood friends in modern-day Zagreb struggle to get along as their relationships are plagued by alcohol, drugs, hooliganism, crime and their country's past.

A medical horror of corrupt gynecologists and true events from Croatian hospitals that will shock the public.

Sitcom about the staff, patients, guests and all kinds of different events in a small clinic at the end of a town.

Although being one of the first movies to take humoristic approach towards violent break-up of Yugoslavia, this motion picture is partly based on real events that took place in September of... See full summary »

This show is about a time in former Yugoslavia, mostly City of Zagreb at the end of 70' and beginning of 80'. In a dramatic and humorous way it tries to describe a life of this great Yugoslavian era through 3 Generations of people. It's a story of love, family problems with a lot of influence of the Urban Culture and Music scene in YU. A time of great music in Yugoslavia such as Rock and New Wave but also somewhat turbulent time right after Tito died. Written by Igor Lepan

In one episode Srica, who is played by Hrvoje Keckes, says : "Let's be realistic, as my son would say." Kazimir Hrastek, one of the main characters from cult Croatian sitcom "Bitange i princeze" was known for often saying the phrase "Let's be realistic." , and he was also played by Hrvoje Keckes. This could imply that "Crno-Bijeli Svijet" (which is set in 1980's) and "Bitange i princeze" (which is set in 2000's) are set in the same universe, and that the character of Srica is a father of Kazimir Hrastek. Kazimir's father appeared in a three episodes of "Bitange i princeze" where he was played by Damir Loncar, but his name was never revealed, and neither was Srica's full name in "Crno-Bijeli Svijet". The main argument that makes this theory relevant is that the two tv shows are made by the same author, Goran Kulenovic. See more »

Best TV-series I have ever seen, so realistic, great actors and the only reasons some people don't want to see it is political or they don't like 80's way of life. Old cars, way of leading companies and problems in families are real and everyone can recognize themselves if they lived in 1980's. A lot of kids like to watch it too because they want to see how they parents lived. And one more great thing about this series is cooperation between Yugoslav different countries and an attempt to improve relations between former Yugoslav countries (cooperation of actors and story from 80's).I hope you'll like it to. Definitely worth seeing!