Back in Theaters: The Best Movies to See This Summer
a list of 35 images
updated 2 days ago 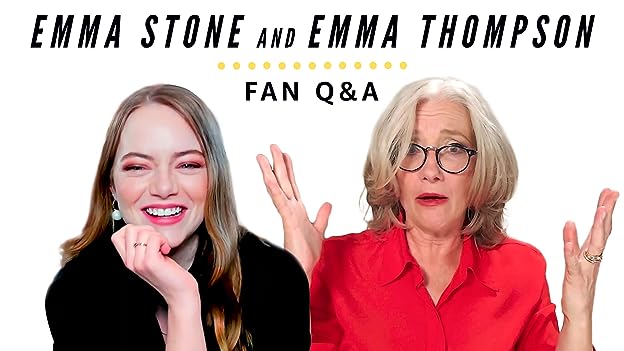 Cruella stars Emma Stone and Emma Thompson reveal what their favorite emojis are to use, whether they're dog people in real life, and the scenes they admire the most from each other's careers.

The dog-hating Cruella DeVil is played by Emma Stone, who in the beginning of her acting career voiced a dog in The Suite Life of Zack & Cody: Crushed (2006). See more »

During the breakout of Jasper and Horace, the pair are behind bars. Even in the 1970s, police cells in the UK wouldn't have used the bars, which are more synonymous with American cells. UK cells often use steel doors with a very small window. See more »

Cruella de Vil: [from official trailer] How does the saying go? I am woman, hear me roar.
See more »

The Disney logo is in black-and-white and red, Cruella DeVil's colors, and features a stormy sky with London in the background. See more »

101 Dalmations is a fantastic film with excellent characters, and after watching it one would think that it cannot be depicted in live action. The live action remakes proved this correct, however Cruella is different.

The angle taken on the film actually provides a sufficient and imaginative backstory for Cruella DeVil, and it cleverly manages to position the audiences on the side of the character despite how much we hate her in all her other depictions. That was quite impressive, as well as the acting from Emma Thompson.

The story was good, except there appeared to be repetition of segments of the movie which just make you feel like the movie is more of the way through than it actually is. Another thing that did this was the constant climactic moments which end up tiring you out a little. This means that when the proper climax happens, the movie feels like it's been going on forever and you find yourself not really as engaged as you should be.

Emma Stone's accent was really impressive, however it must have been the director's decision to make it more posh in certain moments, which I wasn't really a fan of. Also, the incorporation of a full fledged lgbt character felt a little unsuitable for the time period in which it was set (sorry about the spoiler).

The soundtrack was filled with excellent songs which were really suitable for the film. However, the events happening on screen couldn't quite match the coolness of the song resulting in the music being a slight distraction.

Overall a very admirable and imaginative effort from Disney.