Conor McPherson (screenplay by), Eoin Colfer (based on the novel by) | 1 more credit »

June Picks: The Movies and TV Shows You Can't Miss
a list of 29 images
updated 1 month ago

Search for "Artemis Fowl" on Amazon.com

Which 'Artemis Fowl' Star Could Save the World? 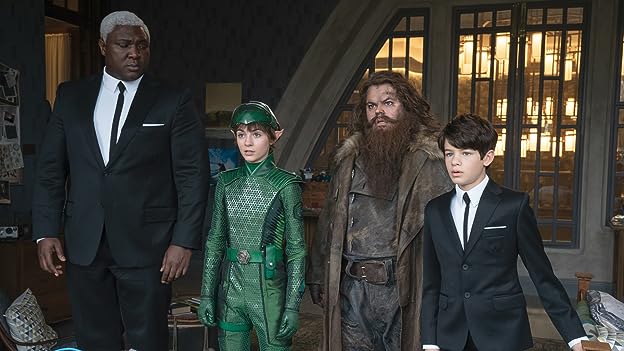 A hardened CIA operative finds himself at the mercy of a precocious 9-year-old girl, having been sent undercover to surveil her family.

After failing to find success on Broadway, April returns to her hometown and reluctantly is recruited to train a misfit group of young dancers for a big competition.

After the disappearance of her scientist father, three peculiar beings send Meg, her brother, and her friend to space in order to find him.

Follows the adventures of Aang, a young successor to a long line of Avatars, who must master all four elements and stop the Fire Nation from enslaving the Water Tribes and the Earth Kingdom.

A teenager discovers he's the descendant of a Greek god and sets out on an adventure to settle an on-going battle between the gods.

Rated PG for fantasy action/peril and some rude humor. | See all certifications »

Eoin Colfer shot his cameo in one day: "It wasn't too taxing - although I did manage to get it wrong a few times. The only direction they gave was: Walk across the field and don't look at the camera. I must have looked at the camera about 20 times. I have a new respect for actors." See more »

Young Artemis Fowl had never been in the secret dungeon before yet after locating the drawer with his fathers journal in he goes straight to another drawer directly above and pulls it out revealing a concealed lamp which he then twists and turns on the lamp thus illuminating his fathers journal having never seen any of the hidden room or it's contents before how did he know to do that. See more »

I felt nauseous while watching it. I want a personal apology from the frozen head of Walt Disney.

Q: Did the author give his blessing to this movie and how it changes the book?
Q: Is this easily the worst film Disney has made in the last decade?
See more »
Edit