Oscars 2020: Nominated Titles
a list of 38 titles
updated 4 weeks ago

October Picks: The Movies and TV Shows You Can't Miss
a list of 12 images
updated 5 months ago
Create a list » 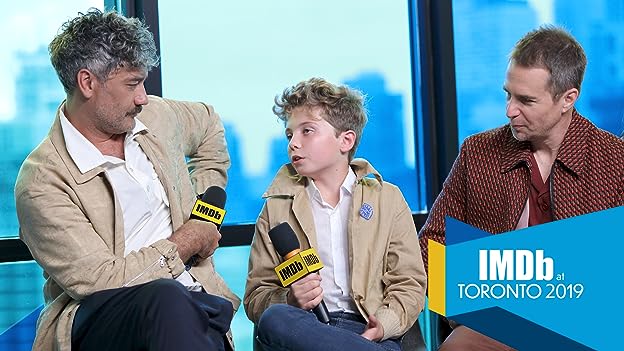 This film marks the third year in a row that Sam Rockwell appears in a film nominated for 'Best Picture' after Three Billboards Outside Ebbing, Missouri (2017) and Vice (2018). See more »

In the film, Hitler keeps offering Jojo cigarettes. Actually, the real Adolf Hitler hated them: Not only did he strictly forbid his generals and staff to smoke in his presence, but also decreed the first successful anti-tobacco laws in history. See more »

Probably one of the most controversial films to come out of TIFF, I went into Jojo Rabbit with cautionious optimism since I am fan of Taika Waititi while still being aware of the divineness it has spawned in some critics. I was pleasantly surprised on how emotional and thought provoking he made this film while still being very funny without going too far.

Jojo is a 10-year old boy who dreams of fighting for his country and making his hero proud. And that hero just so happens to be Adolf Hitler during the final year of WW2. Jojo's blind fanaticism is so extreme he imagines Adolf as his best friend to give him advice, which to no surprise, is not that helpful. After an accident at the Hitler Youth camp, Jojo has to stay with his mother only to discover she is hiding Elsa, a teenage girl who is the very thing his Nazis beliefs have told him to fear and hate: a Jew. As Jojo tries to learn about Elsa's "kind", he begins to sees Elsa as the thoughtful yet scared person she really is and not the monster his beliefs have told her to be.

The smartest thing I can say is Waitia knows when to make a joke about Nazi's beliefs and ideals but then let the bleakness of WW2 set in to embrace the deeper themes and emotions. Within the first act, Jojo sees his world through rose-tinted glasses as he gleefully gives the Nazi salute to his fellow neighbours on a bright sunny day. All of the Nazi characters are heightened and exaggerated for comic relief from Sam Rockwell's Captain Klenzendorf being a tired and annoyed German soldier, Rebel Wilson as the ignorant Fraulein Rahm to Stephen Merchant as the Gestapo agent Deertz. Waititi takes pleasure in making Nazis the but of the joke from showing them being over-committed to saluting each other for just a simple introduction to their obliviousness of believing any stupid fake news they are told came from Hilter himself. Once Jojo settles with Elsa sharing his house, his world begins show its true ugliness as Germany becomes more desperate to hold their ground against the Allied forces. At that point Waititi slows down on the comedy and allows moments of shock and drama to settle in to remind the audience what is the horrible cost of ignorance and blind faith. Cinematographer Mihai Malaimare Jr. switches the color scheme from bright and saturated to cold and grey as the seasons pass to reflect the change in Jojo's state of mind. The parallels to the modern day become very clear without getting too blunt.

The cast plays each of their roles perfectly. Roman Griffin Davis carries the story as a naïve but yet innocence Jojo. Davis is perfectly cast with perfect comedic timing while still being able to sell the emotional beats that are needed. And he has great comedic and emotional chemistry with Thomasin McKenzie as Elsa. McKenzie displays the hardship her character has gone throughout her life and yet still making her fun and sharp-witted when she points out shallowness of Jojo's ideals. Also who is worth mentioning is Scarlett Johansson as Jojo's mother Rosie. Probably the best performance of Johansson I have seen so far, she brings a huge feeling of joy and optimism that is needed to help Jojo's growth as a character. Out of all of the adults that are blind to the horrors the Axis power is inflicting upon the world, Rosie is the only one that is able to see through it and confront it. As for the big question of Waititi himself playing a young boy's interpretation of Adolf Hitler, he handles it very well. His comedic performance is there to show the absurdity of Jojo's brainwashing from the Nazis's teaching. And it helps that he never to tries to humanize the portrayal of his character. There were even a few moments where he becomes a bit more antagonistic towards Jojo as he begins doubting the faith in his idol.

Jojo Rabbit may be a controversial pick if it does get nominated for awards consideration (after I saw it on the last day of TIFF, it surprisingly won the People's Choice Award), but I feel like it is a movie needed for today's political issues. Taika Waititi uses the story of a boy's misguided fantasy and faith to show how easy it is for society to be manipulated into hating minorities, religions and/or groups of people especially when fake news and social media is present. But by the end of the day he shows that compassion and love are still worth embracing in a cruel world so as long as we are able to confront to cruelty in ourselves first.