TV-MA | Adventure, Drama, Fantasy | TV Series (2020–2021)
Next Episode
Thursday, January 21
Episode Guide
9 episodes
2:15 | Trailer
9 VIDEOS | 103 IMAGES
After the world is in ruins, due to a man-made plague, a battle of Biblical proportions ensues between the survivors.

Fear and Loathing in New Vegas

The House of the Dead

The Boulder Free Zone Committee looks to solidify their leadership and bolster the community with a town hall meeting, but Flagg continues to make inroads as he plots to destroy the newly-forming ...

Flagg communicates with Nick and Nadine, and sends a message to Abigail and the Committee

2020 TV Guide: The Best Shows Coming This Year
a list of 60 images
updated 3 days ago

Search for "The Stand" on Amazon.com 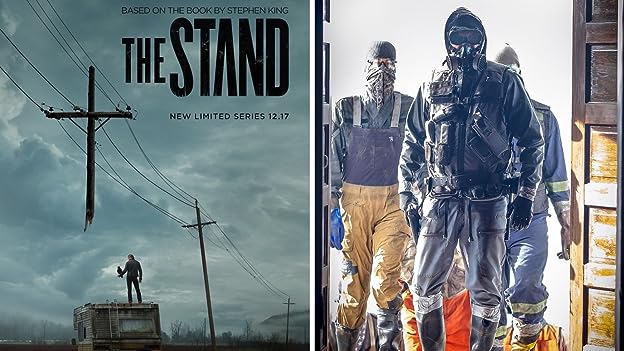 The cast and creators of "The Stand" sound off on their Stephen King adaptation and its serious 2020 vibes.

After the mass destruction caused by a manmade virus called "Captain Trips." A false messiah emerges, possessing incredible powers and hellbent to rule the remaining human society. It's up to a group of people to journey the post-apocalyptic wasteland to stop him and his army. Written by metalgear1355

There's a lot wrong here. Miscasting, burning the candle (or story) at both ends, where I assume we'll meet in some sticky middle ground with the characters well briefed even if the viewers are robbed of the momentum that would have built from the novels original structure. It's a journey. A horrific line to walk and SK planned it perfectly. There's a reason Dorothy and Toto didn't have cabs on the Yellow Brick Road. Some of us WANT to see the flying monkeys. FOR INSTANCE: I miss Larry's escape from NY by way of a corpse infested tunnel. I miss the sheriff who saved Nick and allowed him to become jail warden as he grew too ill for the job. And the gentle insight given as Nick took care of and fed his assailants through the bars of their prison cells, and comforted his torturers as they died. I miss Nadines hallmark red hair. It screamed for hundreds of pages. Until it didn't. Hemingford Home was in Nebraska, but-snip snip! Colorado it is. We were in the CDC for many days. Many days. Begging for info on many neighbors. Those names aren't here, and the neighborhood didn't burn away with fever in this version. THAT community of Stu's didn't ever exist in this show. . . .And the MISCASTING X 10 (take your pick). So much atmosphere from the novel excised, the leftover scenes flicker by so swiftly you realize they bit off more than they could chew in the hours allotted. Stuff it as much as you want, and maybe the characters will finally develop by the time the final battle rolls around. But. . . Judging by the time jumps, THESE characters are static compared to their novel counterparts. I can't even tell they've been on a journey. Oh that's right. There's safety in numbers and the series grouped everyone together hyper fast. Going the path solo in the black night was where I felt my palms sweat. Not in a sunlit room with 20 friends. That part DOES COME, but later. I only wish it didn't cost us each characters solo journey to that bright room. Nighttime in a dead world where you're alone and clueless makes for a terrifying journey. But our guys found an "alternate route" it seems (I say this as more and more is added weekly, but it's nothing compared to the lacking atmosphere). The book was a death march. We chose our paths and the stakes climbed with the days, while the nights were filled with horrifying and strange noises. An anxiety attack on a roller coaster with a courtesy espresso before the ride hit its stride. This series, however, is a drowsy stroll. Like waking from a car nap, you orientate yourself and see how far you've come, and then decide if you should care about where you're at or just black out again. Many separate and small altercations aren't nearly as intimidating as a dreadful marathon filled with a variety of unpredictable dangers. All tension evaporates each time the show flashes forward (or backwards). The tension bottoms out because we are provided relief at the worst time. Horror fans being given thoughtful intermissions (for the delicate viewer out there). It feels like that anyway. And it also renders this risky journey moot. When you see our guys at The Free Zone you don't fear for them in the flashbacks. You KNOW they made it safe and sound. Leaving The Past neutered and without teeth. If you skip the book even though you enjoyed the series you are doing yourself a disservice. If you read "The Stand" and "'Salem's Lot", you'll either be addicted, or once again showing your face at church on Sundays. AND FOR NON READERS of the book who feel they have the right to call long time fans whiny and our viewpoints invalid, you should just keep those opinions to yourselves. If a man could watch just ONE film during his life: "Battlefied Earth", or "Alien", but chose "Battlefied Earth". That's the predicament I see in these reviews. OF COURSE these "non-book" folks think the series is great. They have NO idea of what they're missing.

Q: Will production continue after the Coronavirus lockdown ends or has the series been shelved indefinitely due to sensitivity issues relating to the pandemic theme of the story?
Q: Is there a DVD Release Date ??
Q: So where in production is this adaptation at?Has it already filmed or his in pre production?
See more »
Edit