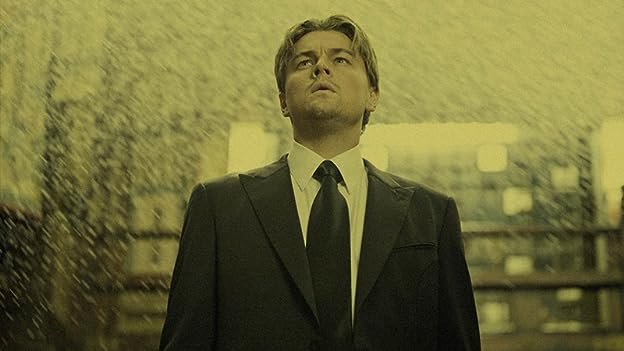 The two mirror scene with the Droste Effect on the bridge in Paris is a reference to two other movies also directed by Christopher Nolan, Memento (2000) and Doodlebug (1997). See more »

When Arthur puts the cab in reverse and rams a bodyguard/projection, the gun flies out of the victim's hand and falls a few feet away. In the next shot, the gun is next to the dead body. See more »

I had the privilege of seeing this movie before it came out, and, like most of DiCaprio's films, it blew me away.

Inception is a well-made movie, filmed in about 6 locations all over the world. The directing was outstanding, there were only about two moments, maybe three seconds in total, where i noticed that visual effects were being used (of course defying gravity is pretty difficult).

The plot was very pleasingly intricate, with a twist-and-turn, keep-you-on-the-edge-of-your-seat type feel. I noticed that this film had similarities with DiCaprios thriller Shutter Island (which i also enjoyed very much)seeing as it left you wondering what was real and what was not. It's great to see a movie with a thick and emotional plot and not just grenade-throwing action heroes who achieve greatness in the end.

Inception also has a very well-composed score, which to me was the finishing touch to a perfect movie. If you're thinking about seeing Inception, definitely go! Even though i was fortunate enough to see a free show, it is worth every penny you pay.

Truly unique, like nothing i've ever seen before. Christopher Nolan certainly covered new ground with this film and wasn't afraid to leave us hanging with a spectacular ending.

Q: Is Eames the Dreamer for the third level or Fischer?
Q: If Cobb and Mal aged 50 years in limbo, why were they young again on the train tracks?
Q: What is the significance of the name "Ariadne"?
See more »
Edit