A film version of the Broadway musical in which Usnavi, a sympathetic New York bodega owner, saves every penny every day as he imagines and sings about a better life.

June Picks: The Movies and TV You Can't Miss
a list of 29 images
updated 6 days ago

Back in Theaters: The Best Movies to See This Summer
a list of 36 images
updated 1 day ago

From June First till August 31st, Vol. 5
a list of 38 titles
created 2 weeks ago

Too Real
a list of 43 titles
created 4 months ago

Search for "In the Heights" on Amazon.com

The 'In the Heights' Crew Talks Representation on Screen 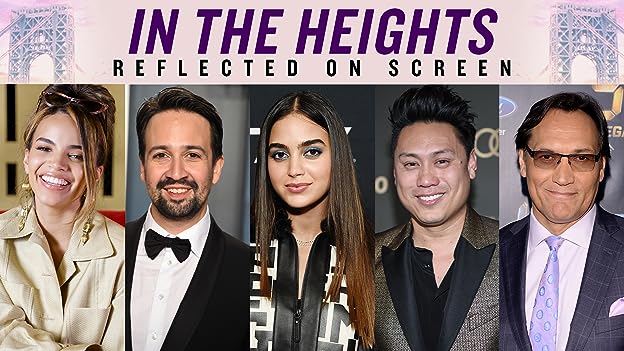 Lin-Manuel Miranda joins his In the Heights director Jon M. Chu and stars Jimmy Smits, Melissa Barrera, Dascha Polanco, Leslie Grace, and more to share inspiring stories of the first time they saw their identity reflected on screen, and how their new musical movie is a big step forward for Latinx representation in Hollywood.

In the Heights centers on a variety of characters living in the neighborhood of Washington Heights, on the northern tip of Manhattan. At the center of the show is Usnavi, a bodega owner who looks after the aging Cuban lady next door, pines for the gorgeous girl working in the neighboring beauty salon and dreams of winning the lottery and escaping to the shores of his native Dominican Republic. Meanwhile, Nina, a childhood friend of Usnavi's, has returned to the neighborhood from her first year at college with surprising news for her parents, who have spent their life savings on building a better life for their daughter. Ultimately, Usnavi and the residents of the close-knit neighborhood get a dose of what it means to be home. Written by Broadway.com

Turn Up the Volume on Your Dreams See more »

(At 1:53:36) When Nina and Benny are dancing along the outside of the building, the satellite dish is pointed north. As NYC is in the northern hemisphere, it should be pointed south. See more »

Kevin Rosario: [to Nina] Ignore anyone who doubts you.
See more »

Before the credits roll, some graffiti art is shown of actress and singer Doreen Montalvo, a member of the original Broadway cast of "In the Heights" who also appeared in the film who passed away in 2021, with the words "Doreen - Para Siempre", a reference to the song she sings in the film and the show. See more »

Both times in theaters and was still amazes the 2nd time. Will be going back for a 3rd viewing.

Q: Who is the choreographer?
See more »
Edit

In the Heights See more »