The End of Something

Reeling from the events at Dealey Plaza, the siblings head to the farm to help save Harlan - only to find themselves drawn into a deadly showdown.

As the Fives plot against each other, one of the siblings makes a big sacrifice to help Vanya. Plus, Lila learns the truth about her parents.

As a lifetime of secrets and resentment bring the Umbrella Academy crashing down, the Hargreeves siblings realize the worst is still to come.

Search for "The Umbrella Academy" on Amazon.com

"The Umbrella Academy" Crew Takes on the 1960s 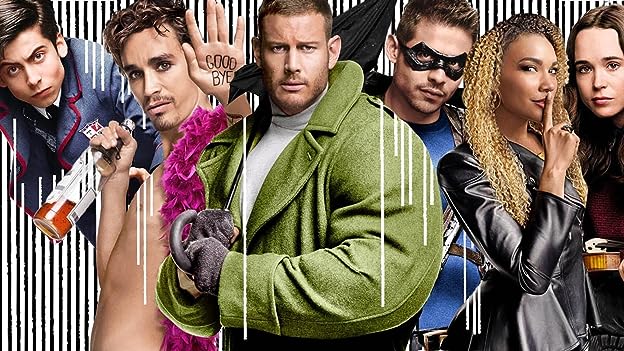 IMDb sat down with the cast and co-creator of "The Umbrella Academy" to discuss how the Hargreeves will navigate cults, assassination, and civil rights in 1960s Dallas.

On the same day in October 1989, forty-three infants are inexplicably born to random, unconnected women who showed no signs of pregnancy the day before. Seven are adopted by Sir Reginald Hargreeves, a billionaire industrialist, who creates The Umbrella Academy and prepares his "children" to save the world. But not everything went according to plan. In their teenage years, the family fractured and the team disbanded. Now, the six surviving thirty-something members reunite upon the news of Hargreeves' passing. Luther, Diego, Allison, Klaus, Vanya and Number Five work together to solve a mystery surrounding their father's death. But the estranged family once again begins to come apart due to their divergent personalities and abilities, not to mention the imminent threat of a global apocalypse. Written by jesusblack-30225

In the "Umbrella Academy" comics, Allison/The Rumor is white. In this series she is played by African-American actress Emmy Raver-Lampman. See more »

Overall the umbrella academy is a good series, but what raises it above average is the amazing use of music. Absoloutely astounding. The acting is pretty good. Aidan Gallagher does a great job portraying an old man in a 13 year old body, it is a believable performance and it is a great character. When it comes to the rest of the characters, Vanya seemed a little flat, and she didnt give me much up until the last few episodes. The story line with Luther and Allison was unnecessary, and at some point i found myself skipping through them. Klaus is a great comedy relief, but we still see a deeper side to him. Definitely one of my favorite characters.

The first episode is a bit slow, but it gains some momentum at the end. The story line builds up nicely througout the rest of the episodes. At some points the plot seems a little predictable, but nothing that bothered me too much.

I definitely recommend the umbrella academy, and I am looking forward to season two!

Q: Who plays the waitress in the donut shop in episode 1?
Q: Why were the Swedes giving the cats haircuts?
Q: Do you know the violin music at the end of each episode?
See more »
Edit