Nicholas Braun of "Succession" talks about what it's like to play the most relatable member of the Hirsch family.

Why 'The Irishman' Is Scorsese's MCU Movie 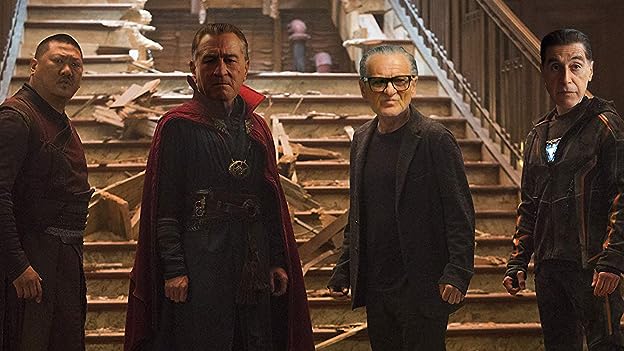 On this IMDbrief we break down what Martin Scorsese has been saying about Marvel movies, and why his latest and greatest The Irishman may be from the Mean Streets of the MCU.

The chartered Cessna light-twin has modern "computer" instruments not in production for several years to come. Its parked propeller doesn't move, it's parked in the same spot, & the clouds are the same in both the arrival & return scenes. The identification N-number is of a design not available in that much-earlier era. It's a charter-op's turbocharged piston-engine plane, not a private jet. See more »

Q: Will this film get a Blu-Ray/4K/DVD release along with the SVOD one? After all, how do they expect to make a profit out of this $160,000,000 film?
Q: What is the meaning of the water on the back seat and fish delivery discussion during the pick-up of Hoffa before he gets killed?
Q: Does Steve Van Zandt really sing in his scene?
See more »

Martin Scorsese's The Irishman is a magisterial mob epic...this movie is reflective more about greatness and losses. Finally Scorsese has brought the lost charm of gangster movies after so many years...but don't expect that this movie is treated with the same manner of Goodfellas..and the violence in this movie is not as extreme compared to his other movies in this genre, it's mainly focuses on the relation between Frank Sheeran and his boss Jimmy Hoffa..more like I say this is the ultimate gratitude to mob or gangster genre from the greatest living director with his competency.

Robert De Niro gave his best performance in years..Pacino is electric, hope he will get his long deserved 2nd Oscar..Joe Pesci is real deal, he is not the desperado like in his other movies, in it he is sharp-witted quite sensible guy...when you see on these guys on screen you see the true power of art..The other cast members are also great.

The film's first 30 or 40 minutes may be felt slow by some people but from when Hoffa kicks in, there is no turning back..The Irishman is the best movie of the year for me so far and 2019 is going to be one of the greatest years in movie history.