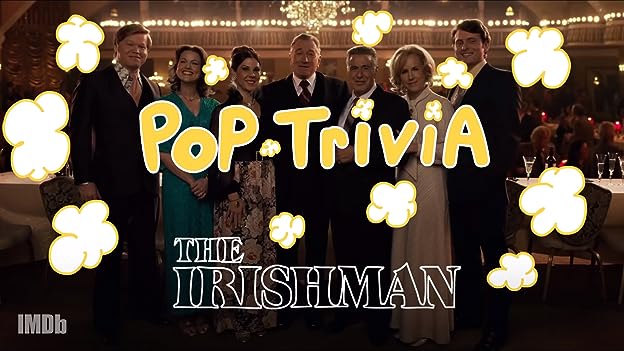 Stephen Graham came up with the idea of swatting Jimmy Hoffa's ice cream off the table before going into their fight scene. Graham warned Scorsese and the crew what he was going to do so no one would be hit by the dish, but wanted to surprise Pacino. Pacino's startled reaction was genuine. He afterwards complimented Graham for successfully surprising him. See more »

The Irishman is another outstanding Scorsese film. De Niro gives one of his best performances in years. His narration is spot on and he makes us genuinely feel for Frank Sheeran. I believe his first Oscar nomination for years is inbound. Pesci is also great in a somewhat reserved role, but it's Al Pacino that really shines in this film. He gives his typical loudmouth performance and should be considered the favourite for best supporting actor, in my book. The film has a good pace to it. The nearly three and a half hour runtime flies by... for the most part. Midway through the second act, things can get a little slow but by no means is it boring. Perhaps it's the kind of film you watch on Netflix rather see it in cinema. The character development overall is excellent. We get a good grasp of every character by the end of the film due to the run time. However, we don't hear a huge chunk of information regarding Frank's Irish background. It is merely mentioned with one or two references. I personally had no issue with the de-aging. I think it's done really well. At no point was I distracted or thought it looked unrealistic. The ending and/or final act as a whole is conclusive. You leave the cinema with a smile on your face. I see a best picture nomination incoming for The Irishman. You should check it out when it comes to Netflix November 27. 9/10

Q: How violent is The Irishman compared to other Martin Scorsese films?
Q: Will this film contain record-setting profanity?
Q: Will this film get a Blu-Ray/4K/DVD release along with the SVOD one? After all, how do they expect to make a profit out of this $160,000,000 film?
See more »
Edit