TV-PG | Animation, Action, Adventure | TV Series (2021– )
Next Episode
Friday, May 14
Episode Guide
16 episodes
2:05 | Trailer
17 VIDEOS | 129 IMAGES
The 'Bad Batch' of elite and experimental clones make their way through an ever-changing galaxy in the immediate aftermath of the Clone Wars.

May Picks: The Movies and TV You Can't Miss
a list of 26 images
updated 1 week ago

2021 TV Guide: The Best Shows Coming This Year
a list of 46 images
updated 2 weeks ago
Create a list »

Search for "Star Wars: The Bad Batch" on Amazon.com

The Batch gets stuck on a desolate moon.

Meet the Clone Troopers of "Star Wars: The Bad Batch" 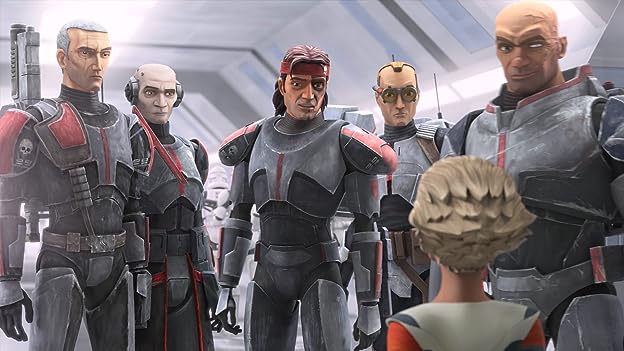 IMDb talks with celebrated voice actor Dee Bradley Baker to learn how he came up with the unique character sounds of each member of the Bad Batch. Also, producer and head writer Jennifer Corbett helps explain what makes Dee Bradley Baker so unique.

The clone special unit called "The Bad Batch" consists of clones with helpful side effects, such as super strength, make their way through the newly founded empire and trying to find out why all clone troops, except themselves, opposed their jedi generals.

The character known as Echo was a prominent side character in the clone wars series and was thought to be dead after sacrificing himself in an explosion until being rescued and recruited by the bad batch. See more »

I know some are coming into this show relatively hesitant after the bad batch arc in season 7, but this first episode will make everyone more than optimistic. This show will explore so much of the rise of the empire, something that is relatively new on screen. With 15 more episodes, there is bound to be great character development with each of the members- this first episode already started off strongly. As always, god bless Filoni.