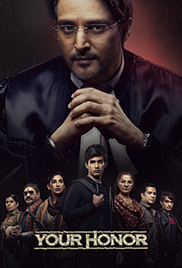 1:01 | Trailer
1 VIDEO | 11 IMAGES
As the son of a reputed judge gets involved in a hit and run, we see how even the most upright people break In order to save their family. The judge sacrifices relationships and subverts the law to save his son from a vengeful gangster.

The "Most Anticipated Indian Movies and Shows" widget tracks the real-time popularity of relevant pages on IMDb, and displays those that are currently generating the highest number of pageviews on IMDb.

Bishan decides to negotiate with Harman Mudki by promising him a favour once he becomes the High Court judge. When Bishan meets Abeer in jail later, Abeer's confession stuns him and compels him to ...

An Eye for an Eye

Pandit takes revenge for the acid attack by killing Harman's henchman, following which Bishan, after realizing Ruma wants to leave the case, goes to her house to convince her not to do that and finds...

Harnam fails to catch the guy who paid Satnam a visit at the hospital, following which Satnam comes out of the coma, and Bishan records the meeting between Kiran and Harman regarding the toy car ...

How well does Michael Sheen know his own career? IMDb quizzes the "Quiz" star on his IMDb page.

Web/Tv Series I have Seen....
a list of 21 titles
created 2 months ago

Search for "Your Honor" on Amazon.com

Set in West Bengal, the teaser begins with a couple of police officers investigating a murder in the jungle of Sunderbans. They visit along with locals to find a mutilated dead body of a ... See full summary »

When her world suddenly turns upside down, will Aarya become the very thing she hated?How far will she go to survive and protect her family?

"A father's love can save a life... or take one," sets the tone for a dark and gritty series.

Sunil is home alone when the doorbell rings. The stranger at the door is the husband of Chhaya, a woman that Sunil is having an affair with. The man asks many uncomfortable questions about their affair, becoming more and more intrusive.

A set of brave cops deal with the dark underbelly and bring some of the most sinister customers to justice.

It is a War Thriller based on the theme of Indian Army and Uri Surgical Strike.

Bhonsle is a retired policeman and is living a non-interfering life in a colony dominated by locals, diagnosed with stage 4 brain tumor. When the migrant resident politics take a nasty turn, he chooses to take a stance and deal with it.

A small town panwalla falls for a schoolgirl who lives opposite his shop. He experiences love, jealousy and betrayal without meeting her even once.

Dark, gripping and morally complex Drama.The life of brilliant judge Micha Alkoby is heading down a promising path, with a promotion coming soon. It all changes after his teenage son, Shay,... See full summary »

This series just asks one question - how far will you go to protect the one you love. Two desperate and driven men must engage in the ultimate cat and mouse game to save the one they love.

Sex, drugs and a gruesome murder. An edgy one night stand turns into a nightmare for Aditya, when he wakes up with blood on his hands. The evidence is stacked against him, but he doesn't remember the grisly crime. Is he guilty or not ?

The story through the eyes of Himmat Singh is based on the inspiration was taken from Nineteen Years of nationally significant events, several espionage missions were undertaken by India in the last two decades.

Set in Ludhiana, a small town in Punjab, this is the story of an upright and honest man who sacrifices, subverts and manipulates all morality and relationships to save his only son. Judge Bishan Khosla is about to become a High Court Judge when his only son, Abeer Khosla, gets involved in a hit and run. The conscientious Bishan is about to turn his son in, when he learns that the victim is the son of a dreaded and violent gangster, currently in prison because of him. Told with riveting performances by a stellar ensemble (Jimmy Sheirgill, Yashpal Sharma, Meeta Vashisth, Varun Badola) and shot aesthetically in the heart of small-town Punjab, we follow Bishan's fall from grace as he uses his wits and knowledge of the law to save his son, as the bodies pile up. This is an arresting drama series that walks the thin line between moral and immoral, justifies the greys, and compels the viewer to introspect what constitutes honor. Written by SonyLiv_India

What a pathetic series it is. Kuch bhi ho raha hai...koi kuch bhi karr raha hain. And the dumb son is too much to take. Wish he would have been killed by the gangster instead of every one else in there. Only reason to take him must have been either he was the financer or else he could have been the producer's son.