TV Tracker: Renewed and Canceled Shows
a list of 114 images
updated 1 day ago

Editors' Picks: Streaming TV and Movies on Prime Video
a list of 40 images
updated 1 week ago

September Picks: The Movies and TV You Can't Miss
a list of 17 images
updated 2 weeks ago
Create a list » 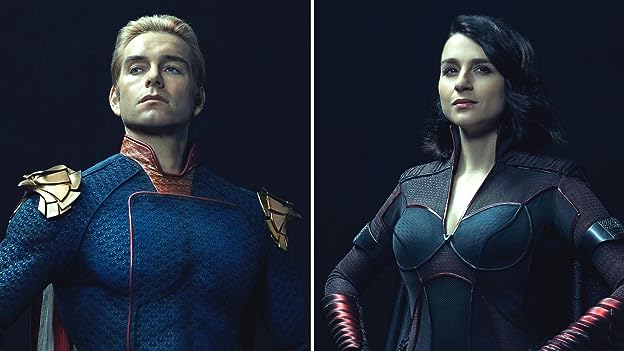 Vought's premier team of heroes, The Seven, are a loose pastiche of DC's Justice League. Several of the Seven share powers and visual similarities with DC's heroes: Homelander/Superman, Queen Maeve/Wonder Woman, The Deep/Aquaman, A-Train/The Flash, Black Noir/Batman. Several other parodies of famous heroes feature in the graphic novels of The Boys and have been referenced but not yet featured on-screen in the show, such as Tek Knight (based on Iron Man) and the G-Men (based on Marvel's X-Men). See more »

First it's just a very interesting take on the whole superhero genre. But there's also a lot more. Great actors, great storyline and very nice picture. I guess for me it's the best superhero series yet, followed by Titans and Umbrella Academy.

Q: Are there plans for any more seasons to be made?
Q: What's with that fly in a couple of scenes flying in front of people faces?it's clearly some kind of Easter egg or reference, can someone answer this?
Q: Will this be available on DVD in the future from amazon?
See more »
Edit