Expected October 1, 2021
Feature adaptation of Frank Herbert's science fiction novel, about the son of a noble family entrusted with the protection of the most valuable asset and most vital element in the galaxy.

Search for "Dune" on Amazon.com 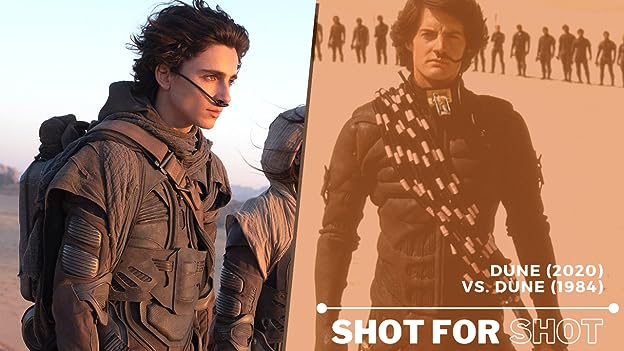 Does the new Dune look familiar? Check out our side-by-side comparison with scenes from David Lynch's 1984 adaptation.

A mythic and emotionally charged hero's journey, "Dune" tells the story of Paul Atreides, a brilliant and gifted young man born into a great destiny beyond his understanding, must travel to the most dangerous planet in the universe to ensure the future of his family and his people. As malevolent forces explode into conflict over the planet's exclusive supply of the most precious resource in existence-a commodity capable of unlocking humanity's greatest potential-only those who can conquer their fear will survive. Written by Warner Bros.

Paul Atreides: Fear is the mind-killer. Fear is the little death that brings total obliteration. I will face my fear, and I will permit it to pass over me. When the fear has gone, there will be nothing. Only I will remain.
See more »

The Warner Bros and Legendary Pictures logos are brown and sparkle with sand/melange spice. See more »

Q: Any news of when a trailer can be expected ?
Q: Will there be any reference to Omnius and Erasmus?
Q: Will the rock/fusion band Toto be asked to reprise their excellent soundtrack of the new Dune? I suspect that David Paich, Steve Porcaro, Steve Lukather, and Joseph Williams would love to do it.
See more »
Edit