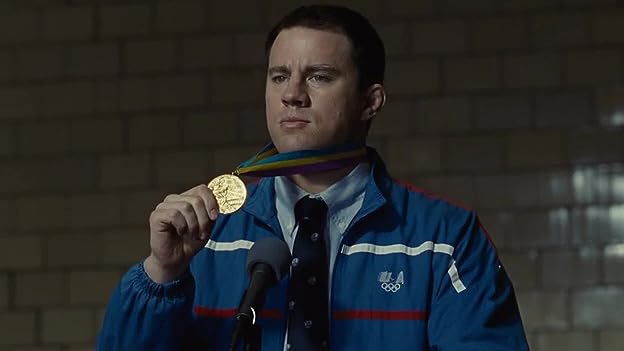 Originally, Bennett Miller was supposed to be in production for this film in 2011, but got sidetracked stepping in for Steven Soderbergh on the directorial duties for Moneyball (2011). See more »

Foxcatcher: A Slow Burn to an Explosive Climax.
26 December 2014 | by PostingandToasting – See all my reviews

Foxcatcher is a movie for those who value patience as a virtue. There is not a lot of dialogue and not even a lot of wrestling (which is bold for a movie centered around Olympic wrestlers) but rarely have I seen a film that had a constant buildup of tension throughout. One phrase that you will see a lot when reading about this film is that it is a "slow burn" which is accurate. It makes you uncomfortable and anxious to the point of frustration because you are constantly waiting for the other shoe to drop.

The story centers around Olympic wrestler Mark Schultz (Channing Tatum) an anti-social, brooding athlete who seems to be constantly living in his older brother David's (Mark Ruffalo) shadow. David and Mark have both won gold medals at the 1984 Olympics but more people are drawn to David because he is warm, charismatic, and open...everything that Mark is not. We watch Mark as he seems to go through life with a chip on his soldier, trying to forge his own path without the help of his brother. Mark receives a call from a representative of a John Du Pont (Steve Carell) who wishes Mark to visit him on his Foxcatcher farm and propose the idea of him and the entire USA wrestling team to make Foxcatcher their official training facility with Du Pont bankrolling the entire operation. From there, we watch an initial positive relationship sour as the we learn more about Du Pont and his intentions.

The cast is lights out here. Tatum gives the performance of his career in a dark turn as Mark and Ruffalo might score an Oscar nomination for being the one ray of light as his older brother David, who only has the best intentions for Mark and his future. It is Carell though, who steals the show. You always read about how comedians, whom Carell is more popularly known as, all have a "dark side" in them which is where they get there comedy from that allows them to make shockingly effective transition into drama (think Jim Carrey in "Truman Show" and Robin Williams in "Insomnia") and he will go down as another prime example of that here. Du Pont is a man of privilege who, like Mark, is trying to find a way to make his mark on the world and seek the approval of others. He is socially awkward, maybe even a coward and uses his money and family "dynasty" as its referred to in the film, to give him a sense of entitlement to gain respect from others.

From the point they meet we wonder why Mark would fall into a relationship with Du Pont but we see they do share similarities in terms of their personalities and both feeling the need to prove themselves. So it's no surprise to see the relationship eventually sour because in the fight to become the more relevant one, Du Pont will win due to his already established social status and wealth. Du Pont is always trying to seek the approval of his mother (Vanessa Redgrave), who sees wrestling as a "low sport", and Du Pont tries to create this deluded fantasy of what he is trying to do with this wrestling team to please his mother. Du Pont calls himself a "coach" of the wrestling team, when it seems he knows nothing about the sport, he claims his athletes see him as a mentor and a father figure when in reality, he is just the guy signing their checks. The tension comes to a head once David gets involved and begins to see Du Pont for what he really is and the climax catches you buy surprise and leaves you devastated. .

Director Bennett Miller has only made three films (Capote and Moneyball the other two) but it's safe to say he is three for three with this being his most ambitious work yet. Foxcatcher is the type of film that has failed in the past due to its' modest pace but the performances keep you engaged just enough to be blown away in the end.