Where to Watch: 2021 Golden Globe Nominated Films and TV Series
a list of 35 images
updated 3 months ago
Create a list »

Netflix streaming
a list of 24 titles
created 1 month ago

Search for "The Trial of the Chicago 7" on Amazon.com 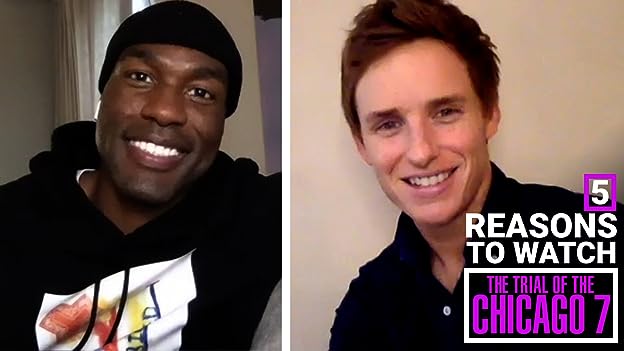 The Trial of the Chicago 7 stars Yahya Abdul-Mateen II and Eddie Redmayne share their five reasons not to miss Aaron Sorkin's courtroom drama on Netflix.

In Chicago 1968, the Democratic Party Convention was met with protests from activists like the moderate Students for a Democratic Society led by Tom Hayden and the militant Yippies led by Abbie Hoffman and Jerry Rubin, which led to violent confrontations with the local authorities. As a result, seven of the accused ringleaders are arraigned on charges like Conspiracy by the hostile Nixon administration, including Bobby Seale of the Black Panthers who was not involved in the incident. What follows is an unfair trial presided by the belligerent Judge Hoffman (No relation) and prosecuted by a reluctant but duty-bound Richard Schultz. As their pro bono lawyers face such odds, Hayden and his fellows are frustrated by the Yippies' outrageous antics undermining their defense in defiance of the system even while Seale is denied a chance to defend himself his way. Along the way, the Chicago 7 clash in their political philosophies even as they learn they need each other in this fight. Written by Kenneth Chisholm (kchishol1970@gmail.com)

In 1968, democracy refused to back down.

Rated R for language throughout, some violence, bloody images and drug use | See all certifications »

In regards to the film's timely subject matter in 2020, Aaron Sorkin described the film as being more about modern day than the 1960's. He explained that, "The script didn't change to mirror the times. The times changed to mirror the script." See more »

One of the characters says the reason that he was not drafted was that he had a high lottery number. That is impossible as the lottery started after the trial began.

Also, the draft lottery which was shown in the picture had nothing to protests in Chicago because the lottery was a year later. See more »

Aaron Sorkin's "The Trial of the Chicago 7" takes to a story from the 1960's and brings us a sure bet for Best Ensemble during Award Season. Tom Hayden played by Academy Award Winner Eddie Redmayne brings a droll but nuanced performance to this well scripted movie. Based on the real life story, the script brings the feeling of the era to this move. However, the final product feels less like a 60's film of the era and more like a polished dialogue heavy play. This is not to say the film doesn't have its brilliant components. Because it does. The directing is strong and the performances are captivating. This is a surefire bet for a Best Screenplay nomination at the Oscars. Overall, it feels very relevant today and it hits its a nerve throughout. Sorkin delivers again and Frank Langella shines as Julius Hoffman, the judge grow to hate from the first time we meet him. His performance brings a strong response from the audience to fully engage into this story. I can't wait to see this as a play.

The Trial of the Chicago 7 See more »