Editors' Picks: Streaming on Netflix
a list of 73 images
updated 2 days ago

Search for "Mank" on Amazon.com 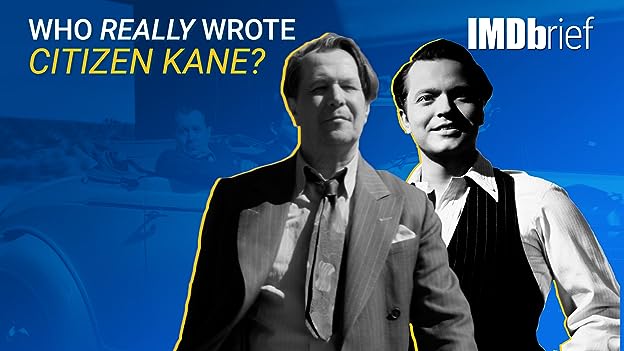 1940. Film studio RKO hires 24-year-old wunderkind Orson Welles under a contract that gives him full creative control of his movies. For his first film, he calls in washed-up alcoholic Herman J Mankiewicz to write the screenplay. That film is "Citizen Kane," and this is the story of how it was written. Written by grantss

Rated R for some language | See all certifications »

This is the second film to detail the process of creating Citizen Kane (1941), following the semi-fictitious RKO 281 (1999) which starred John Malkovich as Herman J. Mankiewicz and Liev Schreiber as Orson Welles. See more »

During the writer's meeting they make reference to "The Wolf Man." The Wolf Man didn't come out until 1941, over a year after this takes place. See more »

Title Card: In 1940, at the tender age of 24, Orson Wells was lured to Hollywood by a struggling RKO Pictures with a contract befitting his formidable storytelling talents. He was given absolute creative autonomy, would suffer no oversight, and could make any movie, about any subject, with any collaborator he wished...
See more »

The Netflix logos at the beginning and end are in full color, despite the film being in black and white. See more »

... just as CK wasn't, so if you enjoy expending time and energy reviewing and commenting on a work of fiction as if it were moulded and forged from the past verbatim, you really need to reconsider how you approach and view the world of cinema and film - perhaps life in general! Perspective, interpretation and imagination are the keywords and, on this occasion, it helps if you have an interest or familiarity with some, not all, of the characters portrayed and the products of their toil and travails - as this will definitely impact your view on the rendering which, in my opinion, was enhanced by a spectacular performance from Gary Oldman, further elevated and reinforced by three stunning constructions from the supporting ladies and embellished with my ability to acknowledge fact from fiction in the name of entertainment. Watch a documentary or read a biography if you want to be educated!

Q: What is the significance of Louis B Mayer dropping his handkerchief out of the car window after Irving Thalberg funeral?
See more »
Edit