R | 2h 4min | Horror, Mystery, Sci-Fi | 28 February 2020 (USA)
2:44 | Trailer
37 VIDEOS | 46 IMAGES
When Cecilia's abusive ex takes his own life and leaves her his fortune, she suspects his death was a hoax. As a series of coincidences turn lethal, Cecilia works to prove that she is being hunted by someone nobody can see.

New and Upcoming VOD, DVD, and Blu-ray Releases
a list of 65 titles
updated 4 days ago

Editors' Picks: Our Favorite Reboots and Remakes
a list of 28 images
updated 3 weeks ago

Search for "The Invisible Man" on Amazon.com

Why 'Invisible Man' Almost Vanished Before It Was Made 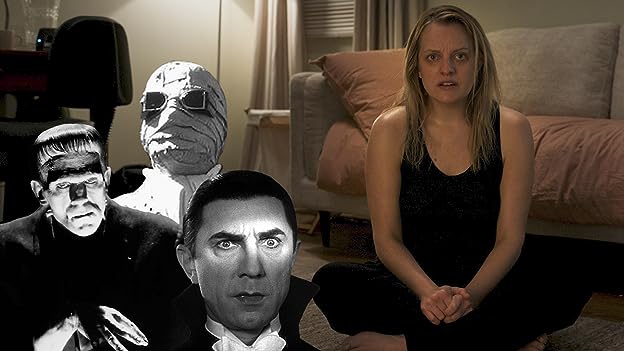 On this IMDbrief, we break down how director Leigh Whannell's fresh spin on an old story had to fight its way to the top.

A vertical prison with one cell per level. Two people per cell. One only food platform and two minutes per day to feed from up to down. An endless nightmare trapped in The Hole.

The film follows Cecilia, who receives the news of her abusive ex-boyfriend's suicide. She begins to re-build her life for the better. However, her sense of reality is put into question when she begins to suspect her deceased lover is not actually dead. Written by Max

What You Can't See Can Hurt You

Rated R for some strong bloody violence, and language. | See all certifications »

When Adrian and Cecilia sit down to eat dinner, the slices of meat on Adrian's plate move between shots. See more »

Cecilia Kass: He said that wherever I went, he would find me, walk right up to me, and I wouldn't be able to see him.
See more »

The opening scene has large waves crashing against a cliff ; and the last of the opening credits appear as if painted onto the cliff by the water, then disappearing. See more »

The UK version was cut to secure a 15 certificate, by removing 3s of bloody injury detail in a scene of self-harm. See more »

Q: Is this still part of the Dark Universe or is it a standalone movie?
See more »

Mind Games Nightmare Without the Presence of the Invisible Man.
28 February 2020 | by Impartial-Critic – See all my reviews

An interesting modern take on the invisible man concept in this twisted mind game nightmare yet it comes with the lack of the invisible man presence! An abused wife escapes her narcissist and sadistic husband to her friend's house only to know after a couple of weeks that he committed suicide, in what seems like a happy ending for her turns out to be hell as she feels her husband's presence around here almost everywhere which leads her to suspect that he's still alive and won't let her go this easy.

So far the idea sounds interesting but for a general thriller, not revival of a classic, I believe the plot should've been approached with more of a homage to the classic adaption. I know the idea of taking chemical potions to become invisible is over used but a plot mix between modern technology and past methods would've been a better choice, I already have couple of ideas on how to do so just by writing this.

Elisabeth Moss carries the movie well, yet the movie feels more like "The Invisible Man's Wife" story more than being The Invisible Man story! Practically almost the whole movie is focused on the wife, her mental suffering and what she's going through, you can barley see/sense any character development or acting from the invisible man at all. Some scenes are very predictable like you can almost see through but it's a nice piece of a (general thriller) for the most part.