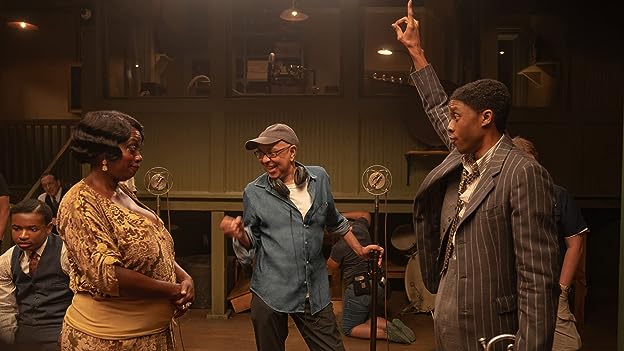 Viola Davis and her Ma Rainey's Black Bottom co-stars address the power of playwright August Wilson's writing, and how they used his words to create an authentic Black experience.

Everything Comes Out in the Blues.

In 2015, Denzel Washington announced that he would be bringing all ten of August Wilson's "Century Cycle" plays to the big or small screen. Ma Rainey's Black Bottom is the second filmed Wilson adaptation Washington has produced in this cycle, after Fences (2016). In September 2020, Washington told the New York Times that the third film in the series would be The Piano Lesson, and that he hoped to cast his own son John David Washington and Samuel L. Jackson, with Barry Jenkins directing. See more »

Levee: I know what I'm doin'. Let me handle them my way.
See more »

I thought it was very similar to Fences (2016), another August Wilson adaptation and unfortunately in both I found the dialogue very tedious. The performances in both are good, in this particularly Chadwick Boseman - he has he most to work with. I didn't find any part of the narrative compelling. I enjoyed the music, but so little of the runtime is spent actually playing music. Instead there's an awful lot of wordy bickering. I feel like 50% of the lines could have been cut and you'd be left with the same film.