Never Have I Ever

After unwelcome news sparks a fight with her mother, Devi seeks an escape. Mohan's birthday brings an opportunity for closure - and for new beginnings.

...been the loneliest boy in the world

With absentee parents, a shallow girlfriend and no one to hang out with, Ben Gross is lonelier than ever, until an unlikely invitation offers some hope.

...had to be on my best behavior

Flashbacks unearth painful memories and resentment for Devi. Meanwhile, Kamala is forced to get honest as the family welcomes her suitor at home.

Editors' Picks: Streaming on Netflix
a list of 73 images
updated 2 months ago

Search for "Never Have I Ever" on Amazon.com

"Never Have I Ever" Stars Name Their Fave Actresses 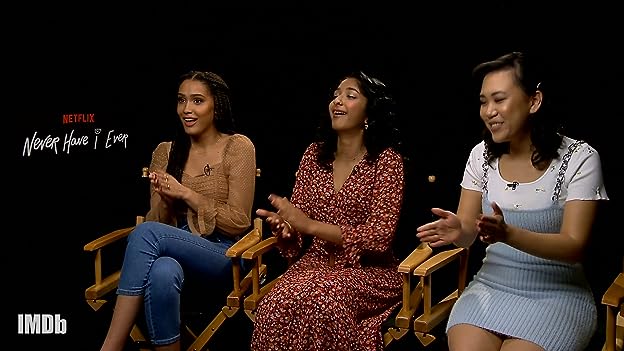 "Never Have I Ever" stars Maitreyi Ramakrishnan, Lee Rodriguez, and Ramona Young reveal the movies and actresses that mattered most to them as young fans.

During an April 2020 interview with Terry Gross on the National Public Radio program "Fresh Air," Mindy Kaling said that the element of the series's plot in which Devi develops temporary paralysis in response to her shock and grief over her father's death was a true story from the real life of the brother of the show's co-creator, Lang Fisher. "When we were talking about the series--there are so many teenage series . . . about love and sex and all of that--and we were both really interested, because we had parents that died unexpectedly, in talking about grief and how grief manifests itself. And [Lang's] brother, after her parents got divorced, had about four months when his legs were paralyzed. And then, all of a sudden, they started working again. And they went to every doctor. They went to every psychologist. And it was this mysterious thing. . . . In researching it, this is something that happens to people, particularly young people, sometimes after trauma. So that was hard to resist as something to talk about. And after she spoke to her brother and got permission, we felt we wanted to use it in the series, because we thought it was a really fascinating physical manifestation of a teenager's grief." See more »

I watched all episodes in one go, it was a delightful experience.

Never Have I Ever See more »