Search for "The Witches" on Amazon.com 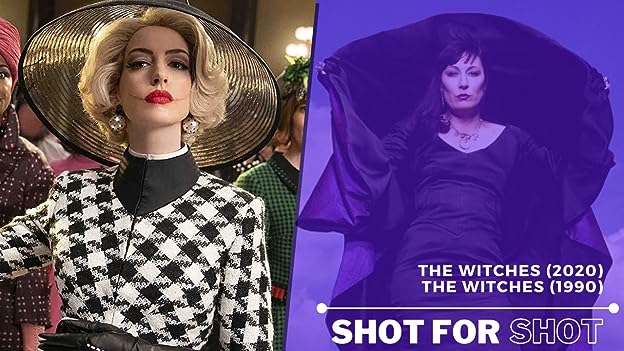 Reimagining Roald Dahl's beloved story for a modern audience, Robert Zemeckis's visually innovative film tells the darkly humorous and heartwarming tale of a young orphaned boy who, in late 1967, goes to live with his loving Grandma in the rural Alabama town of Demopolis. As the boy and his grandmother encounter some deceptively glamorous but thoroughly diabolical witches, she wisely whisks him away to a seaside resort. Regrettably, they arrive at precisely the same time that the world's Grand High Witch has gathered her fellow cronies from around the globe-undercover-to carry out her nefarious plans. Zemeckis is joined by a world-class team of filmmakers, including Alfonso Cuarón, Guillermo del Toro and Kenya Barris. The cast includes powerhouse performances from Anne Hathaway, Octavia Spencer, Stanley Tucci, Kristin Chenoweth and Chris Rock, with newcomer Jahzir Kadeen Bruno as the brave young hero. Written by Warner Bros./HBOMax

Footage of sniffing scenes from various Looney Tunes shorts were references for the animation of The Grand High Witch smelling out the main character as he hides from her. See more »

Near the end at 1 hour 34 min Hero mouse references to Mary as Daisy although he learned earlier in the movie her real name and commented on it that it's pretty. See more »

[first lines]
Older Hero Mouse: [chuckles] All right, then. Where were we? Oh, yeah. That's right. Now, I remember. A note about witches. See, here's the thing about them: they're real! Witches are as real as a rock in your shoe. That's the first thing you need to know. The second thing you need to know, they're here! And they live amongst us... side by side, with humans. In every big city in every small town. For all you know, a witch might be living right next door to you right now. They're everywhere! A witch ...
See more »

I love Octavia and Anne, but this movie seems like it was rushed and that they were just phoning it in.

To begin with, the original is a cult classic, so how dare you mess up with it. Then, if you are gonna do it, well, do it well. They were clearly going for a kids friendly movie but I mean, this story is creepy. The mouse animation takes you away from it, specially coming from Henson's animatronics. The Great Witch reveal is underwhelming, and the changes/additions to the story don't serve it. It just doesn't adds up.

It pains me that Cuaron and Del Toro are attached to this project as producers. Zemeckis seems to be going in decline and it just sucks. Dahl's fans may be happier with this ending, but with all the other changes I dunno how they can be happy with the movie in general.

Q: Are any of the original cast going to cameo in the film?
Q: Why is the plot set specifically in Demopolis, Alabama,? Is there any legend about witchery there?
Q: Will a trailer for this film be released by the end of 2020?
See more »
Edit