Spock and Burnham head to Talos IV, where the process of healing Spock forces the siblings to confront their troubled past. Stamets desperately tries to reconnect with an increasingly disconnected ...

The U.S.S. Discovery battles against Control in a fight not only for their lives but for the future, with a little help from some unexpected friends. Spock and Burnham discern vital new connections ...

Burnham heads to the ISS Charon with a special "gift" for the Emperor. With the help of an unexpected source, Stamets gains clarity while trapped inside the mycelial network. Saru asks for L'Rell's ...

TV Tracker: Renewed and Canceled Shows
a list of 115 images
updated 2 days ago 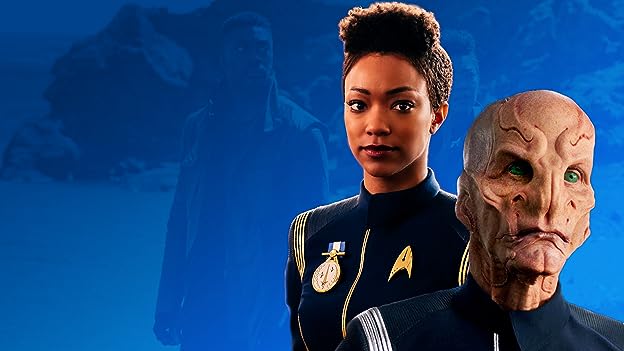 We break down the parallel universes of "Star Trek: Discovery" Season 1, the twisty timelines of Season 2, and a fan theory that bust Season 3 wide open.

Ten years before Kirk, Spock, and the Enterprise, the USS Discovery discovers new worlds and lifeforms as one Starfleet officer learns to understand all things alien.

As she passed away on December 18, 2008, this is the first "Star Trek" incarnation (including the animated series and the 2009-2016 film series) not to involve Majel Barrett. See more »

With Michael being the adoptive sister of Spock, the series have many flashbacks to their childhood and upbringing on Vulcan. Spock's Vulcan half-brother, Sybok, does not appear nor is mention during these scenes. In Star Trek V: The Final Frontier, Spock says that he and Sybok grew up together. However, since it's never stated when Sybok joined Sarek's home - only that he did so following his mother's death - or when he was exiled from the family, it's not impossible Sybok moved in after Burnham, and left before she graduated (the two extremes of the flashbacks). Also, since Sybok was never mentioned before Star Trek V, it seems reasonable the family never spoke of him again after his estrangement. See more »

The serif-font legends and subtitles in the "broadcast" episodes are absent from the DVD versions, where they are replaced with the standard DVD subtitles. See more »

I'm sorry but this blows. A spaceship that cant handle ice? A Millenial in the future saying silly stuff. Just give me Star Trek. Everything lacks in this show.

Q: Why is Suzanne Dood, Voyager mission scientist not given credit in the series?
Q: When is this series situated?
Q: Why do the Klingons in this series look completely different to how they look in all of the previous Star Trek shows and films?
See more »
Edit