Sam and Dean catch up with the Trickster, who sends them through a dizzying montage of TV show parodies, inviting them to play along with their "roles" or be stuck in "TV Land" forever. But once ...

With the Apocalypse looming, Sam and Dean realize they are out of options and make heart-breaking decisions that will change their lives forever.

Sam and Dean's road trip to fight monsters and demons is chronicled entirely from the Impala's perspective.

Film & TV
a list of 49 titles
created 8 months ago

Search for "Supernatural" on Amazon.com

The Stars of "Supernatural" Then and Now 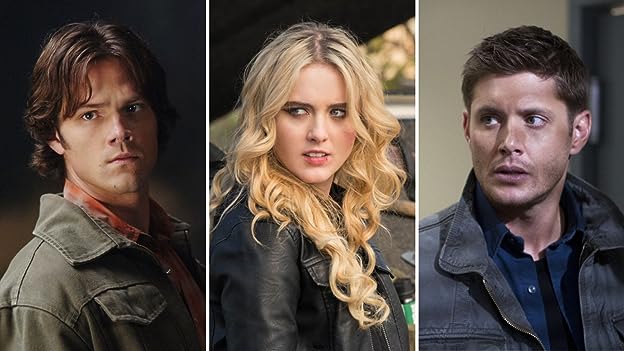 Take a look back at the many memorable "Supernatural" stars who appeared in the fan-favorite series throughout its 15-season run.

This television drama is about the two Winchester brothers, Sam and Dean, who were raised by their father, John, to hunt and kill all things that go "bump in the night" after his wife, Mary, was murdered by an evil supernatural being when the boys were young. 22 years later the brothers set out on a journey, fighting evil along the way, to find their recently missing father who, when they finally meet up with, reveals he knows what killed their mother, a demon and has found a way to track and kill it. Meanwhile, Sam starts to develop frightening abilities that include death visions, visions of people dying before it actually happens. These visions are somehow connected to the demon who murdered his mother and its mysterious plans that seem to be all about Sam. When their father dies striking a deal with the very same devil that had killed his wife, the brothers, now alone and without their mentor, are determined to finish the crusade their father started. But disturbing revelations ... Written by Rachel B.

None of the cast or crew members ever expected the show to last as long as it has. Misha Collins (Castiel) has stated that at the one hundredth episode party, someone said, "Maybe we'll see you at the two hundredth!", and everyone laughed at the idea, thinking the show would be long gone by that time. The party for the two hundredth episode of the series took place in October 2014. The 300th episode of the show aired in February 2019. See more »

Sam Winchester frequently portrays a phony FBI agent to investigate cases. However, his hair is collar length and he's often shown to be unshaven. Both are unacceptable for FBI agents who are not on undercover assignments and Winchester never presents himself as being undercover. See more »

The opening credits are shown during an early scene. See more »

After being disappointed by mediocre to bad new shows like Threshold and Invasion, I am glad that there's at least one new show that really delivers. Supernatural is in a whole different league, with proper style, suspense and great production values. This is a dark, moody show that understands how to use the television medium. The story isn't exactly complex, but the storytelling technique pulls you in and holds your attention, making you want to know more about the supernatural beings and the rules that govern their shadow world. I'm usually not a fan of darkness and horror, but this show is effective. It's dark urban fantasy and it has the potential to go a long way. As it is, the show is way, waay above average, and I rate the pilot episode an 8 out of 10.

Q: What does Y.E.D stand for?
Q: Why did Dean come back for Sam at the end of the pilot?
Q: what is deans ringtone ?
See more »
Edit