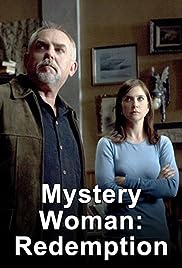 A rare first edition from a pioneer author goes missing in the mystery novels-specialized Kinsey bookshop during remodeling by the local firm of Tyler Dell, who recently lost his father, a ... See full summary »

Hallmark Mysteries
a list of 34 titles
created 3 months ago

Hallmark Movies
a list of 234 titles
created 1 week ago

While searching for a KGB double agent who was about to be exposed by another Russian spy-turned-successful author, mystery bookstore owner Samantha Kinsey and her secretive friend and ... See full summary »

Former Red River TV series star Clint Lawson's Wild West show is in town, the prize act in the annual festival, which the sponsoring bookshop is presiding over. He strains a leg due to a ... See full summary »

A couple accused of a murder go on the run, leaving their baby in the care of bookshop owner & amateur sleuth Samantha Kinsey. Can Samantha look after the baby and solve the case?

She's an avid mystery lover and bookseller, for whom crime has been comfortably confined to the pages of her favorite novels-until a real-life murder turns a weekend of fun and games into a... See full summary »

Amateur sleuth Samantha Kinsey's latest case has her trying to figure out who killed her best friend Barbara after she was left out of her family's will and every one of the family members become suspects.

Murder is something to sing about when Mystery Woman Samantha Kinsey-an expert in pulp fiction, and increasingly proficient when it comes to real-life crime-untangles a record-breaking ... See full summary »

Sam lands a job photographing a new spa in Southern California for their brochure and brings her best friend Cassie along to enjoy some pampering. When one of the guests staying at the ... See full summary »

Hailey, ex DA's prosecutor now therapist, helps the police when the CEO of a hospital dies while a patient and Hailey's coroner boyfriend finds she's been poisoned.

A case is reopened into Hailey's fiancé's murder back in her college days. The disappearance of a fellow student working at the college paper may be connected to the murder.

A rare first edition from a pioneer author goes missing in the mystery novels-specialized Kinsey bookshop during remodeling by the local firm of Tyler Dell, who recently lost his father, a Vietnam veteran. Retired English teacher Jim Carter, who overheard everything, is murdered shortly after a row in Reverend Tucker's homeless shelter Haven with aggressive lush Murphy. Rude police chief Connors isn't up to an investigation while the killer keeps sniping, so the bookstore's armchair sleuths duo does it alone, starting from a lacquered box left by Jim for his illegitimate daughter, who never even knew his name. It starts a set of cues, slowly unraveling a grim intrigue starting during a 1965 US illegal intrusion into Red Khmer territory. Written by KGF Vissers

Why do I watch Mystery Woman? I don't know, except that I love mysteries no matter how bad, and I am a fan of Kellie Martin as an actress and as a person. This series was beneath her, not particularly well written, well directed, or well acted. That about sums it up.

The story begins with some soldiers in wartime, probably Vietnam, finding a treasure at a destroyed Buddhist temple.

We then cut to the present day. The bookstore is having plumbing problems which are being remedied by Tyler Dell, from a local company. A man named Jim Carter shows up and while he's there, a rare book goes missing, and Samantha calls the police. But the book isn't anywhere.

Jim Carter confides in Samantha that he is in town to connect with his daughter, but he's murdered later on. He's left Samantha a note for his daughter and a box with clues inside -- but what they lead to is uncertain. And why leave it to Samantha? The reverend who runs the homeless shelter has a few answers as Samantha and her assistant Philby, who seems to have once been a government agent with big connections, try to solve the mystery of the murder and the box.

The culprit is evident in the first fifteen minutes. To show how sloppily written these shows are, one character is using an assumed name. Talking about him in the past, he's called by his real name except during a flashback where, for some reason, he is called by his assumed name. Sloppy.

Mystery Woman is low-key to the point of sleepwalking, with Clarence Williams III phoning it in and Kellie Martin doing the best she can. The police investigator is unpleasantly aggressive, and I can't decide if he's overacting or just comes off that way because everyone around him is so underplayed. Bad direction, anyone? The sad thing is, if I spot another one I haven't seen, I'll watch it. I'm a sucker for mysteries, even if it's Mystery Woman.