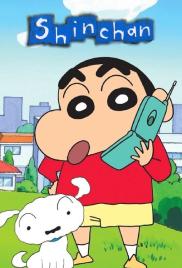 1:10 | Trailer
4 VIDEOS | 102 IMAGES
English language adult parody based on the Japanese series Shinchan (1992). This entry is for the Funimation English dub which originally aired on CN's Adult Swim between 2006 and 2011.

Shin plays Puke Skypooper and saves the galaxy in this parody of "Star Wars" Epiodes 4-6.

How We Spent Our Two-Year Summer Vacation! Anime is for Children (and Loser Adults)! Soaking Wet Country Club!

J anime
a list of 48 titles
created 4 months ago

Search for "Kureyon Shin-chan" on Amazon.com

Shinnosuke Nohara, A.K.A. Shin-chan, a combination of Dennis The Menace and Howard Stern, is a 5-year-old growing up in Kasukabe in this animated series. His foul mouth and rude behavior constantly scandalize his parents (although his father seems to be a big influence), his teacher, and everyone else with the bad luck to cross his path. Later in the series Shin-chan gains a baby sister, who seems well on the way to following in his footsteps. Written by Jean-Marc Rocher <rocher@fiberbit.net>

In August 2020 the most viewed Shinchan-video on YouTube was "Crayon Shinchan: Bathtime": a video in which a hand lifts puppets to create a moving story with Shinchan, sister Daisy and dog Lucky. It was viewed by more than 31 million viewers. See more »

[Hina has gotten into the video cabinet]
Misae Nohara: [taking the tapes away from Hina] No, no, Hina. Those are tapes that Mommy and Daddy made and we can't afford the therapy you'd need if you ever saw them.
See more »

The end credits are played over footage of Shin dancing around. See more »

Funimation took the advantage of making this anime more successful in America by re-organizing the episode segments in any order they like it to be. Also the writers included movie/TV show parodies and more vulgar jokes to make it more funnier than the original version. A majority of Japanese kanji was replaced with English, while some occasions the kanji is left in tact. See more »

Ahh, yes, I remember this show, I watched it sometimes back when it was airing here, it was a very funny anime that seemed very different from the rest of the popular and over-hyped series here, but nonetheless it was also a very popular show to a lot of people. The animation may not look very colorful like most popular anime shows but the humor is what makes it great, Shinnosuke or Shin-chan is like the Japanese answer to Bart Simpson or Stan of South Park, he gets very much in trouble with his parents like the time he got lost and went to a police station bothering the cops and citizens reporting sexual harassment, I also like the one where he messes up the restaurant they were in. I used to watched this on RPN until it was replaced by the Nick toon shows, they are fine, but I wish they would still air this. I see the movies based on this sometimes on BS WOWOW, so it's proof that this show is still good out there. Oh yeah, the Philippine dubbed version has Andrew E., a popular singer here in the Philippines, he voiced Shin-chan, but I believe he did it perfectly and not too cheesy.

Q: How many episodes were produced?
Q: Is this the original Crayon Shin-Chan anime?
See more »
Edit