A year after the murder of her mother, a teenage girl is terrorized by a new killer, who targets the girl and her friends by using horror films as part of a deadly game.

Search for "Scream" on Amazon.com

Who Almost Starred in 'Scream'? 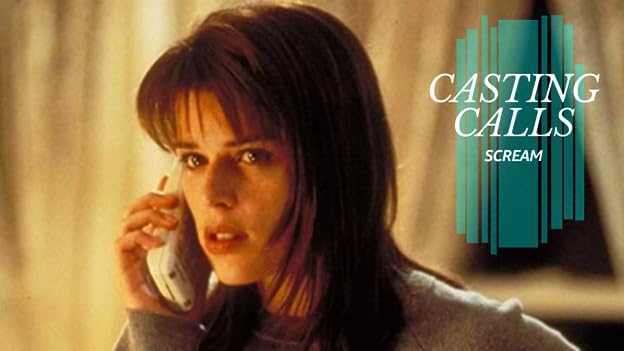 Can you picture Molly Ringwald as Sidney Prescott? Or Ben Affleck as Billy Loomis? We go through all the young Hollywood stars who were almost cast in this horror classic.

A year after her mother's death, Sidney Prescott (Neve Campbell) and her friends started experiencing some strange phone calls. They later learned the calls were coming from a crazed serial killer, in a white faced mask and a large black robe, looking for revenge. His phone calls usually consist of many questions, the main one being: What's your favorite scary movie? Along with much scary movie trivia, ending with bloody pieces of innocent lives scattered around the small town of Woodsboro. Written by Joss Oran

Rated R for strong graphic horror violence and gore, and for language | See all certifications »

Sony Pictures filed a lawsuit against Dimension Films and Miramax, claiming that the title "Scream" infringed on the copyright of Sony's own Screamers (1995).. After the case was settled out of court, the details remain confidential. Scream 2 (1997) producer Marianne Maddalena considered that the case was a result of other issues between the two companies and did not truly pertain to the film's moniker. Maddalena confirmed that the studio was free to use the Scream brand for future films. See more »

As Sidney is walking up the side porch, after getting off the bus, a boom mic shadow is visible near her hand. See more »

Henry Winkler, who played Principal Himbry, was asked to go uncredited because the producers did not want to detract any attention from the younger, lesser known actors. See more »

The US LaserDisc version contains the director's cut with ca. 20 seconds of restored footage that was originally cut to avoid being slapped with the NC-17 by the MPAA. It also has commentary by director Wes Craven and writer Kevin Williamson. In the commentary, Craven notes five places where his cut differs from the theatrical release: See more »

There's more than a few reasons to hate `Scream'; the main reason would be that the film single-handedly resurrected the teen-slasher genre, a movie category that had long been beaten to death. Because of the success of `Scream', witless horror crap like `I Know What You Did Last Summer' and `Urban Legend' got greenlighted, half the teenage casts of various WB television shows got summer acting jobs, and some awful scripts that should've been left dead and buried `Teaching Mrs. Tingle' got to see the light of day. `Scream' is responsible for a lot of garbage. But the truth of the matter is, `Scream' is also a phenomenal movie.

The plot of `Scream' is very simple: a masked knife-wielding maniac is busy stalking the students of High, killing them off one by one. The killer's inordinately obsessed with one girl, Sidney Prescott (Neve Campbell), who of course gets involved in the quest to unmask the killer. The catch (in case you don't already know it), though, is brilliant. Everyone in the film is familiar with all the slasher film conventions. They know that you shouldn't walk in the woods alone at night. They know that having wild sex is an unwritten invitation to be hacked to pieces. They know not to say things to each other like `I'm going outside for a cigarette; I'll be right back.' -- such statements are virtual death warrants. One of the best examples (and best characters) of this is Randy (Jamie Kennedy), the film-obsessed nut of the film, who actually goes so far as to muse what `real' actors and actresses should play the other characters in the film, going so far as to joke about who gets to be Tori Spelling. All the dumb conventions of slasher films are pulled out of the shadows, exposed for what they really are . . . and then, some of them get used anyway, because the characters willingly choose to ignore those conventions. Some cliches are thrown away, while others are embraced. `Scream' really turned the horror/slasher film genre on its ear, becoming the first truly suspenseful and exciting slasher film in many, many years simply because it suddenly had a million new avenues to explore. The film's self-awareness allowed to move in brand-new directions . . . and suddenly, scenes that used to be predictable in other slasher films suddenly become incredibly intense in `Scream'.

Director Wes Craven was perfect for this film -- as director of slasher classics like `Nightmare On Elm Street', he easily sets the visual feels and style of film to perfect evoke all the slasher films of yore . . . and then, much like `Scream's' script, chooses to either faithfully follow the tried and true, or to go off in competely unexpected directions. Either way, Craven manages to create a lot of absolutely nail-biting, thrilling scenes. He also doesn't hold back with the gore, which is always a plus in great slasher films. The acting ranges from barely mediocre to good -- Neve Campbell's okay as Sidney; Courtney Cox is pretty good as tart-tongued reporter Gail Weathers; Jamie Kennedy rules as Randy the film geek; and David Arquette is utterly bland and forgettable as Deputy Dewey Riley, the sad-sack policeman. But casts in slasher films don't particularly matter anyway; the good ones are all about suspense, terror, and gore. And in `Scream', Wes Craven provides massive amounts of all three of those criteria.

The irony is, `Scream' spawned dozens of imitators, and by spawning imitators, all the new avenues opened up by `Scream' quickly got old and boring once more. Still, purely on its own merit, it's an excellent film. The best slasher film of all time is still John Carpenter's `Halloween', without question, but `Scream' actually runs a close second. It's well worth watching. Grade: A-

Q: Is "Scream" based on a book?
Q: What are the differences between the R-rated cut and unrated Director's Cut?
Q: Who killed whom?
See more »
Edit